Zomom is a character that appears in the Sonic the Hedgehog comic series and its spin-offs published by Archie Comics. He is a Zeti and a member of the Deadly Six.

Zomom's entire body is somewhat circular in shape, giving him a rather chubby appearance. His upper body is a vibrant orange color. His thick arms end with equally large five-fingered hands with yellow nails. His lower body is pure black, and Zomom's legs are so stubby to be nearly non-existent. His flat feet are each tipped with a pair of yellow claws, with a third on the heel.

Zomom has thick yellow lips and he appears to be missing some teeth and others seem chipped. Unlike the other Zeti however, Zomom's teeth are square in shape instead of sharp fangs. Zomom has small red eyes with yellow sclera, with black markings surrounding each eye. Often, both of Zomom's eyes rarely point in the same direction. Zomom is fully bald, unlike the other Zeti. On the top of his head Zomom appears to have four relatively short yet sharp horns, each one being striped black and red. On his wrists Zomom wears a pair of black bracelets with grey spikes.

Zomom and the rest of his teammates were forcibly enslaved by Dr. Eggman when the evil scientist arrived on the Lost Hex during the Shattered World Crisis. However, they were subsequently freed by the evil Sigma, and in gratitude forced Eggman and Dr. Wily to help build up his operations for conquest of the Multiverse. However, after being granted power-enhancing armor, the Deadly Six attempted to rebel against Sigma and take the reins of his plan. A trap that Sigma had implanted in the armor was then activated, rendering the Deadly Six obedient to him. Seeking further minions, Sigma dispatched Zomom, Master Zik, and Zazz to Mega Man's World in Wily's time to capture Mega Man.[2] The blue hero briefly mistook Zomom for a certain robot, annoying Zomom as he attacked the Robot Master. Mega Man put up a brave fight, but was ultimately defeated when Master Zik used his powers to turn Mega Man's own weapon against him.[3]

Mega Man and Sonic the Hedgehog, who had been captured by Zomom's other teammates, were soon converted into Roboticized Masters M'egga Man and Sonic Man.[4] The pair ensured in merging their two worlds together, but began fighting upon each other due to Wily and Eggman's secondary programming, and were eventually restored to normal. Recognizing that he had been tricked, Sigma sent Zomom, Zik, and Zeena after the two scientists.[5][6] After their pursuit failed due to the intervention of Xander Payne, they were reunited with Zazz, Zavok, and Zor to lead Sigma's Mechaniloid army against the approaching Sky Patrol and its crew.[7] The heroes fought bravely, with Big the Cat and Gemerl teaming up against Zomom, followed by Mega Man, Sonic, and Sticks the Badger, the latter of whom Zomom batted away. The heroes succeeded in destroying the Mechaniloids, but the Zeti counterattacked by using their technology-controlling powers against the Maverick Hunters and Robot Masters, forcing them to attack the others.[1] They were ultimately halted when the Egg-Wily Uppity Robot Scrambler Cannon destroyed their armor, and Zomom and his teammates were placed in the Sky Patrol brig.[8] Xander Payne's actions later reversed time to a point before Eggman's invasion of Zomom's home, presumably returning him and his comrades to the Lost Hex.[9]

At some point in the not-to-distant future, where Dr. Eggman had enslaved the Deadly Six with his Cacophonic Conch again, Zomom and the other members of the Deadly Six were rounded up by Zavok to capture Mobinis for Eggman.[10]

Zomom is a fairly slow-witted member of the Deadly Six who dislikes being called names. He is also quite gluttonous, with little regard for where the mess from his meals ends up-or on whom.

As a Zeti, Zomom possesses super strength and durability. Despite his massive size, he is also surprisingly agile.

Zomom has the natural ability to manipulate magnetic fields which he can use to control machines and manipulate metals, though the latter application is limited by how advanced the machine he is trying to control is.[2]

While in Sigma's service, Zomom wore armor constructed by Dr. Eggman and Dr. Wily. This armor enhanced all his abilities to such levels that he could control even technology from the year 21XX, but it was also equipped with a device that let Sigma control his mind.[2] This armor was later destroyed by the Egg-Wily Uppity Robot Scrambler Cannon. 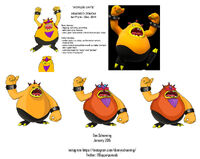 Scrapped concept artwork of Armored Zomom.
Add a photo to this gallery

Retrieved from "https://sonic.fandom.com/wiki/Zomom_(Archie)?oldid=2280967"
Community content is available under CC-BY-SA unless otherwise noted.