The heavy of the skies, he'll try to crash land into you over and over.

The Zipper is an enemy that appears in the Sonic Boom series. It is a mass-produced model of Destruction Troops created by Lyric the Last Ancient.

The Zippers are purple robots with grey sections. They have a thick, almost crescent-shaped body with a round engine behind them, a flap on their back, small leaf-like wings on their sides, and a large eye with a thin pupil, green sclera, thick eyelids and a multi-layered horn on the front.

The Zippers were created by Lyric the Last Ancient in the Robot Facility five millennia ago to help him destroy the earth's lifeforms and conquer it.[1] However, they were shut down when Lyric was imprisoned during an attack on the remaining Ancients.[1][2] In the present, the Zippers were recovered by Lyric after he escaped in the present to search for the Crystal Shards and battle Team Sonic too.

The Zippers can be encountered in Scrapyard and Ancient City. In gameplay, they will fly back and forth until they spot the playable character. While the playable character is in sight, they will try charging into them, for then to retreat to their original position. Sometimes, the Zippers are positioned so the player can cross gaps or reach out-of-reach areas by skipping across the Zippers using the Homing Attack. Should the player destroy a Zipper however, a new one will later respawn to take its place. Additionally, the eleventh Toy the player purchases from Q-N-C's Toy Shop will be a Zipper figurine.

After Team Sonic and Shadow defeated Lyric, the Zippers were stopped once more.

The Zippers are usually mindless and silent drones unwaveringly loyal to Lyric the Last Ancient, having been programmed to obey his every command.[1] Besides that, the Zippers are known for being notoriously persistent and vicious, purposely crash landing into their foes over and over.

As per their design, the Zippers are capable of flight. 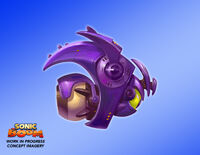