A battle against a Zavok Phantom Copy riding the Death Queen. To win, the player must dodge Zavok's attacks and wait for him to come close for a series of Homing Attacks. Land a total of five hits to defeat him.

I can't wait to see how long you last against this.
Come out and fight me yourself, and I'll mop you up real quick.
Impudent runt. I'm going to savor watching you suffer.

— A Zavok Phantom Copy and Sonic the Hedgehog, Sonic Forces

A Zavok Phantom Copy is the first boss in Sonic Forces. He is fought in the Death Egg's "VS. Zavok" stage, which is the fifth stage in Sonic Forces, and the second stage in the game to be played as Sonic.

The battle takes place on a multistage platform in the middle of the cell room, with many captured civilians watching the battle from their jail cells. The fight begins as soon as Zavok appears, riding on the Death Queen, and is out of reach from Sonic's attacks.

In the first stage of the fight, up to three groups of Rings appear. Eventually, Zavok summons three Buzz Bombers to attack Sonic. Sonic must defeat all three of these Buzz Bombers to proceed. After that, the Death Queen will fire lasers from its legs, followed by a swarm of Buzz Bombers that will attempt to dive bomb Sonic. Following those attacks, the Death Queen will attempt to smash into the arena with its stinger to attack Sonic. When the robot does this, Sonic must move out of the way while standing on the floor to be launched upward into the air, and from there he can strike Zavok with a barrage of Homing Attacks to damage him (Zavok will deflect Sonic's Homing Attack two times before taking a hit). Sonic must also not jump when the Death Queen slams the floor, or he will miss his chance to attack Zavok and must repeat the wave of attacks again.

After landing two hits on Zavok, the second phase of the battle begins with parts of the platform breaking apart, leaving less room for Sonic to stand on, with more waves of Buzz Bombers being summoned to attack Sonic. In this phase of the fight, the Death Queen will begin attacking directly by charging at Sonic with its stinger. Sonic must avoid this attack two times. Zavok will then attempt to crush Sonic with the Death Queen's stinger again. At this point, Sonic must avoid the attack, jump and repeat the processes of Homing Attacking Zavok two more times until Zavok is down to his last hit point. After that, the game switches to a cutscene where Sonic jumps onto the Death Queen and delivers a beatdown on the red Zeti, taking out his last hit point and ending the fight. 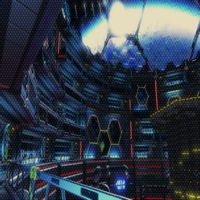