Zapo the jumper has an electric personality.

The Zapo is an enemy that appears in the Sonic Boom series. It is a mass-produced model of Destruction Troops created by Lyric the Last Ancient.

The Zapos mostly resemble snakes with aircraft wings. They each have a thin body with three rows of orange and red wings running down it, a grey sharp point on their tail tips, a brown disk around their necks, and a large black eye with green sclera and red eyelids for a head. Surrounding each of their heads is an orange, hemispherical glass frame.

Five millennia ago, the Zapos were created in the Robot Facility by Lyric the Last Ancient to help him destroy the earth's lifeforms and conquer it.[1] During an attack on the remaining Ancients however, the Zapos were shut down when Lyric got imprisoned.[1][2] They were later recovered by Lyric when he escaped in the present day to search for the Crystal Shards and battle Team Sonic too.

The Zapos can only be encountered at the magma pools in Volcanic Caverns. In gameplay, they hide in magma pools, but will start to jump up from and back into their magma pools in intervals when the player approaches. Notably, from when they emerge to the apex of their jump (where they will slow down briefly), the Zapos will emit electricity that will damage the playable characters if they make physical contact with them; immediately after that, they are vulnerable to physical attacks. Should the player destroy a Zapo though, a new one will later respawn to take its place. Additionally, the eighteenth Toy the player purchases from Q-N-C's Toy Shop will be a Zapo figurine.

After Team Sonic and Shadow defeated Lyric, the Zapos were stopped once more.

The Zapos are usually mindless and silent drones unwaveringly loyal to Lyric the Last Ancient, having been programmed to obey his every command.[1] Other than that, the Zapos are specifically said to be jumpers and have an electric personality.

The Zapos have amazing heat resistance, being able to stay submerged in magma without getting burned. They can also discharge electricity around their bodies, electrocuting anyone upon touch. 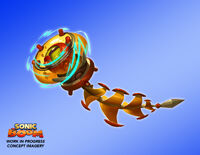