ZERO, also known as E-100, is a character that appears in the anime series Sonic X. It is a robot created by Dr. Eggman, and the first unit in the Doctor's E-100 Series. During its time of service, it was tasked with tracking down Lily and retrieving her Chaos Emerald.

ZERO is a vaguely humanoid green robot with a trashcan-like head. On top of its head is a lid with a black surface and yellow lower rim, and on the bottom of its head is a red stribe. Situated on the bottom of its head up front is a black face section with two red eyes, and extending out in front of ZERO's face is a golden handlebar. On the back of its head are also two green prongs with red tips. On the sides of its head, next to its face, it also has two black bars for shoulders. Attached to these bars are its arms, which have thick green and red forearm armor and mitten-like black hands. Its lower body consists of two stubby rocket thrusters attached on the sides of its hips. These thrusters are red on the top and have black exhausts on the bottom. It also has a fin on its rear, and up front it has a green flap covering its pelvis. This pelvis plate has a black upper and lower rim, and a golden handlebar with a black grip attached to its bottom.

Unlike the other E-100 Series robots, ZERO does not have "E-100" on its body, but instead has an "E" on both sides of its head. Additionally, the headlight on ZERO is on its shoulder, in contrast to the E-100 Series robots in which it is on their mid-section.

ZERO was created as one of Dr. Eggman's new line of E-Series robots; The E-100 Series. It first appeared in Station Square where it kidnapped Amy and Lily, the latter of whom possessed a Chaos Emerald that Dr. Eggman needed. It then proceeded to fly its prisoners to the Egg Carrier, barely avoiding a confrontation with Sonic.[1]

When the Egg Carrier crashed, ZERO somehow survived the ship's violent landing. Upon emerging from the ship's rubble alongside Decoe and Bocoe, ZERO assisted the two former in chasing after Amy and Lily when they arrived. When ZERO finally had Amy within its reach however, it got knocked out by Amy with her Piko Piko Hammer.[2]

In terms of personality, ZERO is very robotic, lacking completely in a fleshed-out personality. It rarely speaks, and when it does, it is in a robotic and monotone manner.[1] Regardless, it is persistent, especially when it comes to chasing down Amy and Lily.[2]

ZERO possesses a built-in propulsion unit for locomotion, allowing it to fly and hover in midair.[1] 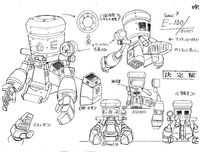