For the Mega Man character in Worlds Unite, see Zero.

ZERO, also known as E-100α[4] or Alpha (アルファ[5], Arufa?), is a character that appears in the Sonic the Hedgehog series. It is the prototype model for Dr. Eggman's E-100 series of robots, designating it as the zeroth E-100 unit, while E-101 Beta is designated as the first unit and E-102 Gamma is the second unit.[5] During its last mission to recover Chaos Emeralds, ZERO relentlessly pursued Amy Rose for the Chaos Emerald she unknowingly had until it had harassed her to the point of being on the receiving end of Amy's hammer.

ZERO is a vaguely humanoid green robot with a trashcan-like head. On top of its head is a lid with a black surface and yellow lower rim, and on the bottom of its head is a red stripe. Situated on the bottom of its head up front is a black face section with two red eyes, and extending out in front of ZERO's face is a golden handlebar. On the back of its head are also two green prongs with red tips. On the sides of its head, next to its face, it also has two black bars for shoulders. Attached to these bars are its arms, which have thick green and red forearm armor and mitten-like black hands. Its lower body consists of two stubby rocket thrusters attached on the sides of its hips. These thrusters are red on the top and have black exhausts on the bottom. It also has a fin on its rear, and up front it has a gray flap covering its pelvis. This pelvis plate has a black upper and lower rim, and a golden handlebar with a black grip attached to its bottom.

In Sonic Adventure, ZERO made its debut by chasing a blue bird in the possession of a Chaos Emerald that had taken refuge with Amy Rose. ZERO chased Amy around Station Square, Twinkle Park, the Egg Carrier, Hot Shelter, and finally, the Final Egg base in the Mystic Ruins.

When it went back to the Egg Carrier, it saw Amy and the blue bird with its relatives, who were inside E-101 Beta and E-102 Gamma. ZERO then attacked and knocked out the small bird with an extending punch. Amy, thinking that ZERO had killed her companion, became furious and attacked ZERO - finally destroying it by knocking it into an electric fence, scrambling its circuits, before smashing the vulnerable circuitry in its head with her hammer, causing it to explode.

ZERO makes a brief appearance in Sonic Advance 2, chasing the player around the Special Stages of the game. In this appearance, it is known as the Robot Guard (ガードロボ, Gādorobo?, lit. "Guard Robo") and Zero,[6] but otherwise looks identical to its previous appearance. If it hits the player, they will lose ten rings.

ZERO appeared in Sonic Rivals 2 as collectible card #81. It was unlocked by obtaining the high score in Chaotic Inferno Zone Act 3.

ZERO pursues its target with a single-minded tenacity, even after birdie's Chaos Emerald had been removed. This also made it possible to trick it, as Amy could hide beneath barrels or around obstacles to elude it. Despite this, it is smart enough to try and use sneak attacks on Amy after their first encounter, and to never reveal the weak spot hidden under its top intentionally. When pushed to the brink, however, it becomes much more aggressive.

ZERO differed greatly from the other E-100 robots as it lacked a projectile weapon, mainly relying on locking onto an opponent and launching its fists to attack its foes, making use of a lock-on system and tethered hands. Unlike the standard E-series model, ZERO lacked legs or a Jet Booster, instead relying on a built-in propulsion unit for locomotion, which helped it to move over all possible terrain. It possessed impressive strength, able to smash through walls in pursuit of Amy and generate shockwaves by punching the ground. It also had strong defensive strength, as Amy could only inflict damage by electrocuting it. It also seems to possess an "overdrive" mode after taking a certain amount of damage, where steam begins bellowing from its smokestack-like head, rendering it invulnerable to any sort of blow from the Piko Piko Hammer.

The final confrontation with the chase master, that takes place around the Egg Carrier's engine deck as round boxing ring. Takes three hits to be defeated.

Amy ends her adventure by battling ZERO at the Egg Carrier's deck as the final (and only) boss of her storyline. A small amount of Rings are spread around the arena for the battle.

The fight's strategy is to knock ZERO into the electric ropes that encircle the arena. When Amy swats ZERO into the hot wires, its body gets an unhealthy jolt, and the top of its green head flips back to reveal a big, blue core. The player must attack this core to deal damage to ZERO, who will then flip back its green top to cover its weak spot.

Arm Punch, the move seen during the Action Stages, is used by ZERO during this battle by first locking onto Amy and then shooting its hands towards her. ZERO also performs the Earthquake Attack. To avoid it, the player has to keep a certain distance between ZERO and Amy to hop over the shockwaves produced. When ZERO is almost finished, it sends an Electric Arm after Amy, which she must skip over to survive. The player must run in the same direction that the rope is turning and jump to avoid it. After landing three hits on its core, ZERO finally explodes, and the player will have cleared Amy's storyline. 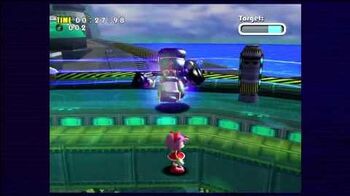 ZERO appeared in the Sonic X anime series in the Chaos Saga. its role in the series mirrors that of its role in Sonic Adventure.

In the Sonic the Hedgehog comic series and its spin-offs published by Archie Comics, ZERO chased Amy Rose and a Flicky around Station Square, eventually being destroyed by Amy. 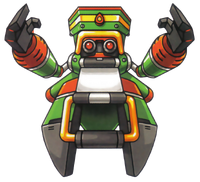 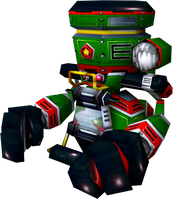 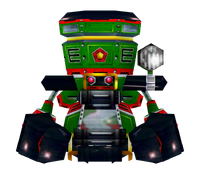