A space station consisting of refighting all of the past zones' bosses before confronting Super Eggrobo Z.

8 (final level) (for Cream, Tails, Knuckles, Amy, and Sonic as well if not all of the Chaos Emeralds are collected)

XX is the eighth and final Zone of Sonic Advance 2.

XX zone appears to be a space station created by Dr. Eggman. It is likely a part of, or in sync with the Egg Utopia.

Having arrived in XX, Sonic and co. are confronted by Dr. Eggman, who uses rebuilt versions of every boss vehicle he has used against the heroes during this adventure. One by one however, the heroes manage to destroy Eggman's vehicles, until the doctor is left to confront them with his Super Eggrobo Z. After Sonic and co. manage to destroy the giant mech, the XX space station starts to self-destruct. Afterwards, Sonic and co. descend through the sky while the space station behind them crash lands at some place in the world, creating a large explosion. Nevertheless, the player's character lands at a meadow (in Cream's case, she is reunited with her mother), strikes a pose at the player and then the credits roll.

XX is a boss rush level where the player must again fight all the bosses that were previously fought in the game though they are easier to defeat this time around, as they require fewer hits. After defeating each boss, the player runs automatically towards the next section for a short while before the next boss appears. Despite not featuring any Checkpoints, should the player die in the stage after defeating the EggHammerTankII, they will respawn in that boss's section of the stage rather than at the beginning of the stage. 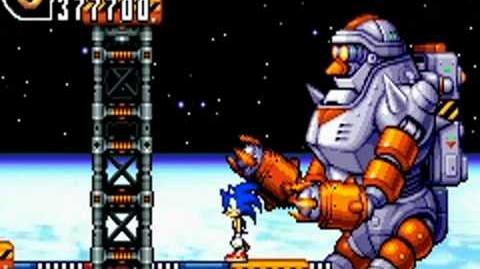