Sonic in X-Zone, from Sonic Advance.

8 (final level)
(Tails/Knuckles/Amy; Sonic if all Chaos Emeralds are not collected)

X-Zone (X-ゾーン, X-zōn?) is the penultimate Zone in Sonic Advance. It comes after the player finishes Cosmic Angel Zone, and acts as the final zone for Tails, Knuckles, and Amy. It is also Sonic's final level if he enters without acquiring all of the Chaos Emeralds from the other Zones. If they are all collected, Sonic will continue on to The Moon Zone.

The level layout to each boss is fairly straightforward. There are grey boxes that will collapse as soon as the player steps on them. Each boss in this zone is a returning boss from past Sonic games. The three bosses in this zone are the Egg Mobile with a wrecking ball from Sonic the Hedgehog, the drill machine from Sonic the Hedgehog 2, and the Egg X, a remake of the Last Utopia Zone boss from Sonic the Hedgehog Pocket Adventure. After defeating these bosses, the space station explodes and the character seemingly free-falls towards Earth's surface until Sonic catches them in the Tornado (or Tails if the player is Sonic). If the player finishes the X-Zone as Sonic the Hedgehog, with all seven Chaos Emeralds collected and the other three character's stories completed, the space station does not explode and Sonic transforms into Super Sonic and pursues the doctor who flees towards the Moon, allowing the player to play through the extra zone, The Moon Zone.

In Sonic Pinball Party, the X-Zone appears as one of the pinball arenas. As with Sonic Advance, this is the last stage when the player plays the Sonic pinball tables. 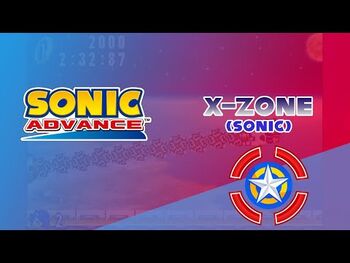 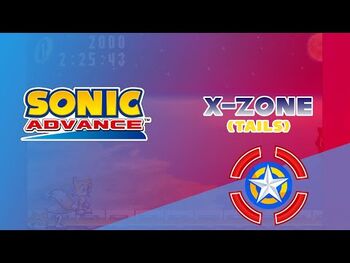