Sonic in a Worm Tunnel

A underground tunnel made by Driller Worms.

The Worm Tunnels are levels that appear in the Sonic Boom series. They are six additional levels that the player can enter from the World Map after collecting enough Sonic Badges. Here, Sonic the Hedgehog races down an underground tunnel filled with Driller Worms. Each World Map in the game has its own Worm Tunnel.

The Worm Tunnels are underground rock tunnels with stalactite-like formations, roots on the roof and some water pools on the bottom. Along these tunnels are sections of green-arrowed, transparent paths with cables below them. These paths are aligned next to each other so they outline a tube or half-pipe. At various points, there are mechanical gates that open as Sonic approaches. Also, a Driller Worm will occasional pop out of the walls in the background.

In a Worm Tunnel, the player plays in 3D, unlike the 2.5D adventure levels. Here, Sonic is stuck at full run and can only move left and right (akin to the Quick Step). While running, Sonic's position in the tunnel is shown on the bottom screen of the Nintendo 3DS. The Worm Tunnels' gimmicks include Bounce Pads and Ener-Rails which are used to cross chasms or reach otherwise inaccessible rails. When riding the Ener-Rails in particular, Sonic can lean left or right to collect Rings- There are also Boost Pads.

Stationary obstacles in these levels include dash blocks and red energy circuits. Touch any of them, and the player is forced to restart the respective level. Sonic can also perform a sprint or a short spurt when the player presses and holds down

, which lets him plow through dash blocks on the route or simply increase his speed.

An area's Worm Tunnel becomes available after collecting the appropriate amount of Sonic Badges and clearing the first or second adventure level in said area. The general goal of all Worm Tunnels are the same: Sonic races down a pre-set path and it is the player's objective to guide him safely to the end of the tunnel. During the course, the player must shift lanes to dodge obstacles and use gimmicks to move between sections at the right time.

The Worm Tunnels get progressively harder as the player advances with the game, with obstacles appearing more frequently and the time to react decreasing. Upon clearing a Worm Tunnel, a shot cutscene will play that shows Sonic boosting into a Driller Worm's mouth and destroying it from the inside, thereby marking the end of the level. 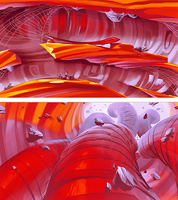