The World of Panzer Dragoon[1] is a location that appears in the Worlds Unite crossover published by Archie Comics. It is an alternate Zone connected to the Multiverses hosting Sonic's World and Mega Man's World. This world was among the many to come under threat from Sigma, forcing its inhabitants to rise up alongside the heroes of the Unified Army.

When Sigma sent several Mavericks to different worlds, Burn Dinorex and Gigavolt Man-O-War attempted to set a Unity Engine in the Drowned Ruins, but met local resistance. When Rotor the Walrus and Bubble Man fought Burn Dinorex and defeated him, the latter expressed anger at Gigavolt abandoning him out of cowardice from the opponents and managed to activate the Unity Engine, to Rotor's horror. Keil Fluge and the Blue Dragon arrived in the area and destroyed the two Mavericks. With Rotor's guidance, they were able to destroy the Unity Engine by weakening its shield with Bubble Man's Bubble Lead and having the dragon fire at it. Amazed by their work, Rotor convinced Keil and his dragon to join the Unified Army and defeat Sigma.[1]

Blue Dragon
Add a photo to this gallery 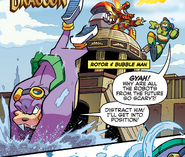 Drowned Ruins
Add a photo to this gallery

Retrieved from "https://sonic.fandom.com/wiki/World_of_Panzer_Dragoon?oldid=2004571"
Community content is available under CC-BY-SA unless otherwise noted.