The World of Monster Hunter[1] is a location that appears in the Worlds Unite crossover published by Archie Comics. It is an alternate Zone connected to the Multiverses hosting Sonic's World and Mega Man's World. This world was among the many to come under threat from Sigma, forcing its inhabitants to rise up alongside the heroes of the Unified Army.

Arriving in the world of Monster Hunter, the X-Hunters tricked a pair of Feylnes into helping them set up a Unity Engine in the Ancestral Steppe. X and Sticks arrived, but just as the fight began, a Gore Magala appeared and easily destroyed the X-Hunters. X prepared to face the elder dragon, but Sticks somehow calmed the beast down, planning to help them attack Sigma.[1] 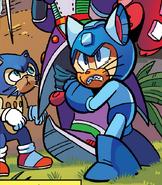 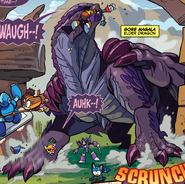 Gore Magala
Add a photo to this gallery 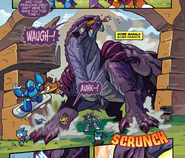 Ancestral Steppe
Add a photo to this gallery

Retrieved from "https://sonic.fandom.com/wiki/World_of_Monster_Hunter?oldid=2072164"
Community content is available under CC-BY-SA unless otherwise noted.