The World of Alex Kidd[1] is a location that appears in the Worlds Unite crossover published by Archie Comics. It is an alternate Zone connected to the Multiverses hosting Sonic's World and Mega Man's World. This world was among the many to come under threat from Sigma, forcing its inhabitants to rise up alongside the heroes of the Unified Army.

The world of Alex Kidd was one of the many invaded by Sigma's army of Mavericks. Magna Centipede attempted to set a Unity Engine on Miracle World, but was stopped by Alex Kidd and his friend Stella. After seeing their abilities, Sonic the Hedgehog and Break Man convince the two to join the Unified Army in the battle against Sigma.[1] 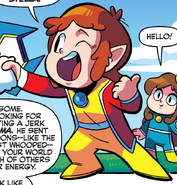 Stella
Add a photo to this gallery

Miracle World
Add a photo to this gallery

Retrieved from "https://sonic.fandom.com/wiki/World_of_Alex_Kidd?oldid=2073962"
Community content is available under CC-BY-SA unless otherwise noted.