Witchcart as she appears on the Japanese box artwork of Tails' Skypatrol.

Old witch on the mine-cart, claiming to turn dissenters into crystals. She shoots sparks out of her mine-cart vehicle.

Witchcart (ウィチカート, Wichikāto?) is the main antagonist and final boss of Tails' Skypatrol. She is a old human witch, who rides around in a specialized rail cart on an island she claims as her own.

Having arrived on an island with her henchmen, Witchcart was riding around the island with her rail cart and claiming the island to her own while threatening to turn any dissenters into crystal, before calling her army of robots and henchmen Focke-Wulf, Bearenger and Carrotia to assist her evil scheme.[1] However, Witchcart soon found herself threatened by Tails who had set out to free the island and its inhabitants from her tyranny.

After being defeated by Tails, Witchcart was hauled up out of her destroyed rail cart by the fox and flown away. She has not been seen since.

Witchcart is fought at the end of DarkCastle Area. Unlike other battles, Witchcart is not using flying vehicle, but instead rides rail cart fast similar to regular in-game objects called Trucks. Reaching to Witchcart may be risky as the player has to avoid touching the ground and even ceiling while attacking on her. Witchcart keeps firing constant stream of small projectiles and magic sparks, which the player can blow by using Tails's Ring which grants a hundred points each.

Like many of the previous boss battles, the player has to land twenty hits or use the Tails' Ring to toss Witchcart into the ground four times to defeat her. 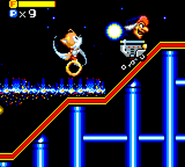 Witchcart as collective card from Sonic Tweet.
Add a photo to this gallery

Retrieved from "https://sonic.fandom.com/wiki/Witchcart?oldid=1438514"
Community content is available under CC-BY-SA unless otherwise noted.