A Wisp Capsule with White Wisps, from Sonic Forces.

The Wisp Capsule[1] is an object that appears in the Sonic the Hedgehog series. It is a type of floating capsule created by Dr. Eggman that is used for containing Wisps.

Each Wisp Capsule contains only one specific type of Wisp within it. Usually, Wisp Capsules only hold one individual Wisp each, although there are exceptions.

To open a Wisp Capsule in gameplay, the player simply has to touch it. The player will then automatically obtain its Wisp. Also, after opening a Wisp Capsule, another one with the same type of Wisp in it will soon after appear in the same spot although this may not occur with some Wisp Capsules in certain levels.

In gameplay, Wisp Capsules for Wisps that the player has yet to encounter will be empty, transparent and cannot be interacted with. Also, these Wisp Capsules have a certain color shade that signifies which Wisp it is supposed to contain.

While numerous Acts in the game ends with a Goal Ring, there are some that have a giant Wisp Capsule, called the "Prison Capsule", instead. These capsules are placed on the ground and contain numerous White Wisps in two long tubes. The Prison Capsules act as Goals that, once opened, means the player has cleared the Act, much like Capsules.

In some of the Acts in Game Land, there exists a special type of Wisp Capsules that has a color-changing question mark inside it instead of Wisps. On most occasions, this one cannot be used manually. Instead, it deploys an Eggman face-shaped balloon, surrounded by hearts, that will track the player for a limited time and inflict damage when touched. If the player uses one of the Color Powers against it, it is possible to destroy this balloon with one hit. On a few occasions, this type of Wisp Capsules can give a random type of Wisps instead.

In Mario & Sonic at the Sochi 2014 Olympic Winter Games, the Wisp Capsules has the same design they had in the console/PC version and Nintendo 3DS version of Sonic Generations, complete with a yellow eye on the front.

In gameplay, the Wisp Capsules appear in the Sonic's Figure Skating Spectacular event. During the routine for this event, the playable characters will come across Wisp Capsules with a different Wisp inside each of them that they will open, thus releasing the Wisp inside them.

In Sonic Forces, the Wisp Capsules look like their Sonic Colors counterparts, possessing no yellow eye on their middle. Like in Sonic Colors, most Wisp Capsules hold only one Wisp, except for those holding White Wisps, which can contain more.

Much like in Sonic Colors, any Wisp Capsule in the Avatar's stages that contain Wisps that do not match any of the Wispons the player has currently obtained will be rendered intangible and transparent until the player obtains their Wisp's associated Wispon. The color of the transparent Wisp Capsules indicate which Wisp is supposed to be in it.

In the Sonic the Hedgehog comic series and its spin-offs published by IDW Publishing, the Wisp Capsules are known as Deployment Pods. Like in the games, they are used to contain Wisps. In this media, their past is virtually identical to their game counterparts', up until after the events of Sonic Forces. During the Eggman War, they were used by Resistance to lock voluntary Wisps inside them so they could be transported safely to the battlefield, where they would power the Wispons used by the Resistance's soldiers. 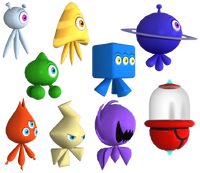