Sonic in Wing Fortress Zone, from Sonic the Hedgehog 2.

Wing Fortress Zone is a giant battleship owned by Dr. Robotnik. Most of the vessel is made out of light brownish metal, with a few parts being red or silver as well. Notably, various circuits and engines can be seen adorning the ship's walls.

After chasing Dr. Robotnik through the skies in the Tornado, Sonic and Tails locate the Wing Fortress and attempt to infiltrate it. However, the vessel opens fire upon them with a laser barrage, damaging the Tornado and making the biplane showly fall with Tails in it. Sonic, meanwhile, is able to get off the Tornado in time and land onto the Wing Fortress before the Tornado falls out of range. Being forced to leave Tails behind, Sonic continues onward to stop Robotnik for good.

Braving through the Wing Fortress, Sonic overcomes several traps, and is eventually able to enter the ship's control room, where Robotnik is waiting for him with a trap. However, Sonic defeats the doctor's trap, making the Wing Fortress fall slowly out of the sky. In panic, Robotnik escapes using his space rocket. Fortunately, Tails returns in a repaired and modified Tornado in time to give Sonic a ride that allows him to leap onto the space rocket and hitch a lift to Robotnik's Death Egg.

Wing Fortress Zone contains all too many opportunities for the playable character to fall into bottomless pits, be it swinging hand-over-hand on the bars right next to the flaming booster engines, or jumping along retractable platforms set on the side of the ship, or being thrown over wide, open spaces by the launcher chairs which lie amidst the steel rigging. Vertical propeller blades are also on hand to damage the player when they run into them.

When the Zone begins, whoever the player is controlling at that time will make a leap from the Tornado's wings and begin the Zone as them. The player will have to explore Wing Fortress Zone alone, even if playing with Sonic and Tails.

In this Zone's boss fight, Dr. Robotnik eschews his usual Egg Mobile and attacks with the level itself. After breaking into the interior of the airship, Sonic (Tails or Knuckles if the player is using 1 of them as the playable character) finds himself trapped by a pair of forcefields, while Robotnik deploys cruelly spiked platforms and a laser beam to cut the hero down. This is quite a difficult one, the trick is to jump atop the floating platforms when the laser opens its shield casing, and wallop it before it fires. After enough hits, the machine overloads, blowing up the forcefields and sending Robotnik running.

In the Sonic the Comic comic series and its spin-offs published by Fleetway Editions, the Wing Fortress was a giant aircraft whose past was virtually identical to its game counterpart's. One time, Sonic and Tails returned to it in order to find one of the space shuttles, which they would use to reach the Death Egg.

In the Sonic the Hedgehog comic series and its spin-offs published by Archie Comics, the Wing Fortress appeared during Operation: Clean Sweep, where Dr. Eggman had reshaped the history of the Prime Zone. When Sonic's multiverse was later completely rewritten following the events of Worlds Collide, the Wing Fortress became a permanent part of the history of Sonic's World, where it had a past nearly identical to its game counterpart's. 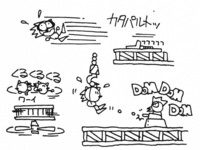 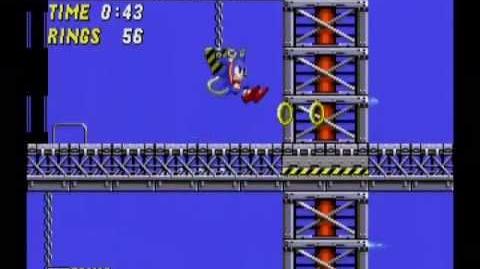