A canyon full of vegetation located at high levels of the surface.

Windy Valley (ウィンディーバレー, Windī Barē?) is an Action Stage that appears in in Sonic Adventure, its enhanced port, Sonic Adventure DX: Director's Cut, and the 2010 remaster. It is a plateau-like valley high in the sky located at the Mystic Ruins. It is the second Action Stage played as Sonic, the first as Tails, and the third as Gamma. As with most other Action Stages in its games, Windy Valley has different level designs for each character, which have three optional missions each.

Overall, Windy Valley is an area in the Mystic Ruins, acceded by using the Wind Stone at the Windy cave. The first section in both Sonic and Gamma's versions of this Action Stage, Windy Valley is a plateau-like mountainous region high above the surface. The soil here takes the form of brown rockoon formations that are covered in a thick layer of green grass. Various platforms here are separated from each other by bridges (some of which are broken) or Wind Paths. The area is decorated by several floating platforms with fans pointing upwards.

The second section of Sonic's Windy Valley version takes place inside of a dark gray tornado. Nevertheless, the platforms and set pieces are the same as the ones found in the previous section.

The third section of both Sonic and Tails' Windy Valley versions takes place high above the clouds, with a clean, light blue sky above. No signs of the plateau can be seen; instead, there are various beige platforms covered in lime grass and connected by paths of rusty, brown metal.

After facing Dr. Eggman near Tails's Work Shop, Sonic and Tails decide that they have to find the Chaos Emeralds to prevent the doctor from using them to power Chaos. They eventually find the Wind Stone and use it to go to Windy Valley. There, the two are caught by a tornado, but are soon able to escape and land on various rusty paths in the sky. After traversing them, the duo finds a Chaos Emerald.

After facing Dr. Robotnik near Tails's Work Shop, Tails and Sonic decide that they have to find the Chaos Emeralds to prevent the doctor from using them to power Chaos. They later find the Wind Stone and use it to go to Windy Valley. There, the two have a race to the Chaos Emerald there. In the end though, Tails wins.

After the crash of the Egg Carrier, Gamma abandons Dr. Robotnik, and tasks himself with destroying the E-100 Series robots. After finding the Wind Stone and using it to go to Windy Valley, Gamma encounters E-103 Delta and destroys it, freeing the Animal inside of it.

In the Wii version of Mario & Sonic at the London 2012 Olympic Games, Windy Valley is featured as the location of the Dream Discus event. While the setting is from Sonic Adventure, the game play is reminiscent of Sonic Riders.

In the anime series Sonic X, Windy Valley is a location on Earth. In this media, Sonic and Tails came to Windy Valley in search of a Chaos Emerald. Gamma later came here to shut down E-103 Delta.

In the Sonic the Hedgehog comic series and its spin-offs published by Archie Comics, Windy Valley was a location in Soumerca. It was here where Silver, Shard and Larry attempted to find Ixis Naugus' apprentice, Geoffrey St. John. However, they failed 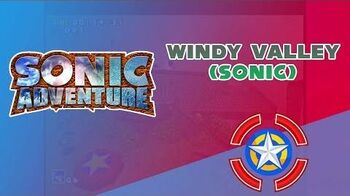