For the Town Stage/Village on the same continent, see Apotos.

Windmill Isle, from the Xbox 360/PlayStation 3 version of Sonic Unleashed.

A coastal cliff region in Apotos

Windmill Isle (ホワイト アイランド, Howaito Airando?, lit. "White Island") is the first Action Stage/Stage in both the Xbox 360/PlayStation 3 version and the Wii/PlayStation 2 version of Sonic Unleashed. It takes place around a beautiful coastal region with various windmills and small towns that lie by the water, being located in Apotos.

Windmill Isle is the area that Sonic the Hedgehog first explores during the events of Sonic Unleashed, serving as the tutorial level for the game.

Windmill Isle is based on Greece and the Greek island of Mykonos. The stage's setting is a coastal region where the sea is nearly always seen in the background. The coast is mostly a highland with steep cliffs bordering the sea and high islands, both inhabited and uninhabited, adorning the sea. There are also old-fashion windmills with jib sails everywhere.

In the outskirts of the town, Windmill Isle consists mainly of seaside fields with hill-shaped, grass-covered rock formations and dirt pathways that wind between the hills and along the edges of the cliffs. The only buildings out here are the area's trademark windmills.

In the populated areas of Windmill Isle, the landscape is dominated by Apotos. These areas are filled with simple, but neat, whitewashed buildings with red and blue railings and balconies, which are built closely together. Also, several trees, potted plants and small grass fields adorn the town: flowers and trees are planted alongside the roads, and plant racks along the roads form small tunnels and walls. Also, the streets here are made of white stone. Leading over the bodies of water in Windmill Isle are long white bridges similar to the town streets.

In the daytime Acts, Windmill Isle is brightly lit up by the sun and has a light clouded sky. In the nighttime Acts, the moon and street lights provide the only sources of light.

After being tricked into powering the Chaos Energy Cannon, transformed into a Werehog and rejected from space, Sonic woke up as he was falling towards the outskirts of Windmill Isle. Fortunately, a mysterious green light temporarily broke his fall, though he still had a hard landing.

Pulling himself out of the ground, Sonic found both the drained Chaos Emeralds and an unconscious imp-like creature. Though the creature got scared of Sonic when he woke him up, Sonic convinced him that he was friendly. Discovering his new form, Sonic introduced himself, only for the creature to realize that he had amnesia, caused by something "falling from the sky." Believing he is responsible, Sonic promised to help him get his memories back by looking for people who know him, much to the creature's joy. Dawn then broke over Windmill Isle, and Sonic reverted back to his normal form.

After a fruitless search in Apotos, Sonic and the creature, whom Sonic named "Chip" after the local Sundae Supreme, returned to Windmill Isle to search there, but found no one there either (on the Wii/PlayStation 2 version, they found a tablet fragment during their search). Later at night, Sonic and Chip returned to Windmill Isle to find Tails. As Tails got attacked by Dark Gaia's Minions, Sonic dispatched the monsters (on the Wii/PlayStation 2 version, they also found a tablet fragment). After Sonic told Tails (who recognized Sonic in his Werehog form) the story about the planet's break-up and his Werehog form, Tails explained that he was in Apotos to collect data, and suggested that they visited Professor Pickle at Spagonia University, whose research could shed some light on Eggman's plans. The trio therefore took off in the Tornado-1 to head to Spagonia.

Much later, Sonic crash-landed in Windmill Isle again, having been send there by Chip after they beat Perfect Dark Gaia, though Chip had to remain behind. Getting back up, Sonic thought he saw Chip, but found only his necklace, which he wore as a bracelet. Sonic then received a telepathic message from Chip, who promised that he would always be with him. Paying his respects to his friend, Sonic left for new adventures with Tails by his side.

Being the first Stage of Sonic Unleashed, Windmill Isle is fairly easy with a go-to layout. Having no exclusive gimmicks or obstacles, the stage only offers the standard gimmicks and hazards of the game as introduction to the gameplay. In the daytime stages, the player does not encounter many environmental hazards besides bottomless pits and a few spikes. In the nighttime Acts, the only real obstacles are the enemies and a few basic gimmicks, such as ledge climbing, beam balancing and lock puzzles.

This Act mostly takes place on the outskirts of Apotos from the place where Sonic crash-landed after being rejected from the Chaos Energy Cannon. This Act serves as the tutorial act for the game's daytime Acts, meaning the game's basic daytime controls are explained during the course of the Act and that little resistance is met by the player. Here, the player has to make it through the rocky hills and over a precipice, before arriving at a bridge near the end of the Act that will lead the player to Apotos and the Goal Ring.

This Act takes place across the town of Apotos. Here, the player travels through the streets and alleys of the parts of Apotos that exist alongside the coastline, while moving from island to island through bridges, grind rails, platforms and/or ramps. Supposedly, here Sonic and Chip are exploring the town in search for clues to Chip's identity.

This Act takes place on an encircling course composed solely of grind rails over the sea. Here, the player has to make a full lap on the course by grinding, while avoiding obstacles along the way, before making it to the Goal Ring.

This Act takes place solely within the town of Apotos. This Act serves as the tutorial Act for the game's nighttime Acts, meaning the game's basic nighttime controls and gimmicks are explained during the course of the Act and that the enemies are rather weak by comparison. Here, the player passes through the town's closely build streets, alleys and a garden area. At the end of the Act, the player then has to defeat a Titan to make the Goal Ring appear.

This Act takes place in a large, enclosed, circular plaza, with twelve lift-able doors on the walls. Here, the player has to find three Key Stones and place them on their appropriate pedestals to unlock the path to the Goal Ring while fighting incoming waves of enemies. After unlocking the path, the player then has to defeat a Titan to make the Goal Ring appear.

The downloadable content pack for the Xbox 360/PlayStation 3 version of Sonic Unleashed, the "Apotos and Shamar Adventure Pack," introduced two additional daytime and nighttime Acts for Windmill Isle to the game. These acts are basically extensions of the original Acts in the game, but are much more difficult to complete. The pack was released on Xbox Live for $4.13 USD on 21 May 2009 and on the PlayStation Network for $3.00 USD on 4 June 2009.

This Act takes place in the same area as the daytime Act 1 in the game. Here, the player has to first play the daytime Act 1 backwards, but with new and harder obstacles and enemies in the way, before proceeding to platforms existing outside the Act's normal boundaries. The player then has to go through a modified version of the daytime Act 1, before arriving at the Goal Ring.

This Act is basically the same as the daytime Act 2 in the game, expect the Act has been modified, having been given more dangerous enemies and hazardous obstacles.

This Act mainly takes place in the town of Apotos and across the sea. Here, the player travels through the streets and alleys of the parts of Apotos that exist alongside the coastline, moving from island to island through bridges, while trying to avoid the countless obstacles in the narrow spaces, such as spikes, flamethrowers, enemies, bottomless pits and more.

This Act takes place in the same area as the last sections of the nighttime Act 1 in the game. Here, the player has to play the nighttime Act 1 backwards through a small platforming segment, but with more obstacles, such as saws and flamethrowers, before having to solve a Key Stone puzzle with more powerful enemies nearby, to access the Goal Ring.

This Act mainly takes place in the small circular plaza area at the end of the nighttime Act 1 in the game. Here, the player has to defeat several waves of enemies, all of which are stronger, have more health and are harder to defeat with a Critical Attack maneuver than normal, before gaining access to the Goal Ring.

Head for the Goal Ring 1

The first main Act of Windmill Isle takes place on the outskirts of Apotos. Here, the player has to travel through the green landscapes with some sharp turns encountered occasionally while fighting some Egg Fighters and Spinners. Towards the end of the Act, they player will enter the town, with the Goal Ring at the end of it.

Head for the Goal Ring 2

This Act takes place inside the town of Apotos, where the player must proceed through the streets of quiet, nighttime town. Halfway through the Act, a Dark Energy Force Field will appear and block the path. To unlock the force field, the player must collecting three Dark Energy Keys that can found in the Act. After unlocking the Force Field, and defeating the incoming Dark Gaia Minions, the player can proceed to the Goal Ring.

This Act still takes place in Apotos, through it is in the coastal region of the town. Near the middle of the Act, the player come across some building that he/she must climb, using ledges and poles. Near the end of the Act at the top of some ruins, is a wooden elevator shaft leading to the cliffs and the climax of the Act where the player has to face Dark Gaia's Minions. Afterwards, the player can climb down to the Goal Ring.

Nearly all Acts/Missions in Windmill Isle in both versions of Sonic Unleashed contain a number of collectibles the player can obtain when playing through them: 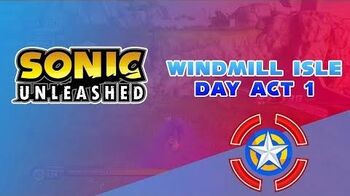 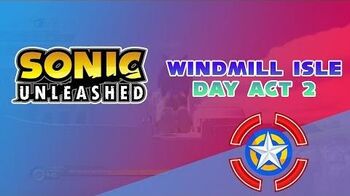 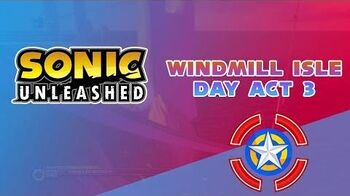 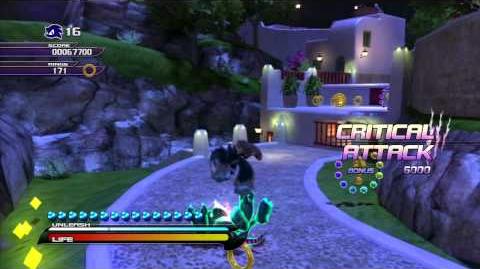 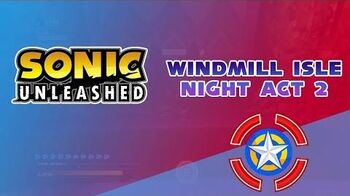 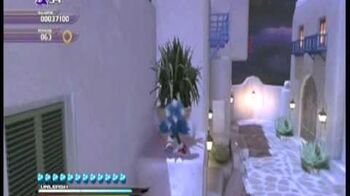 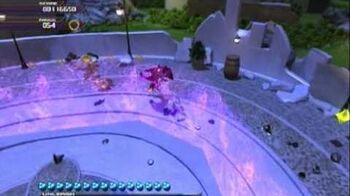 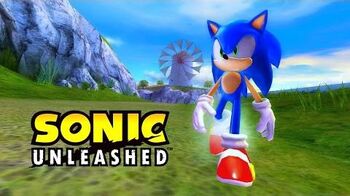 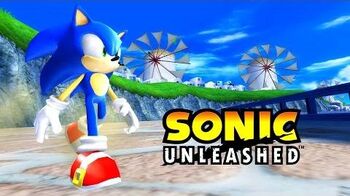 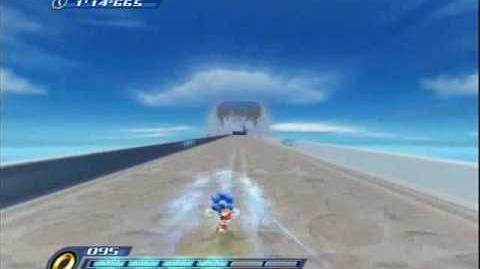 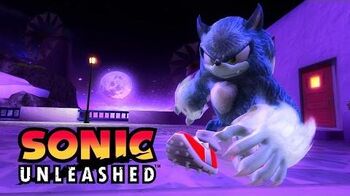 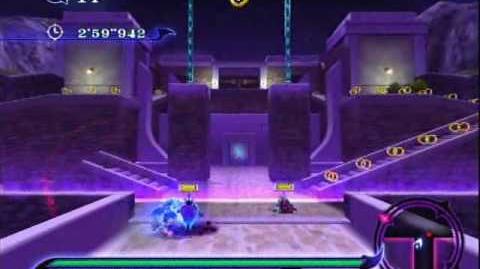 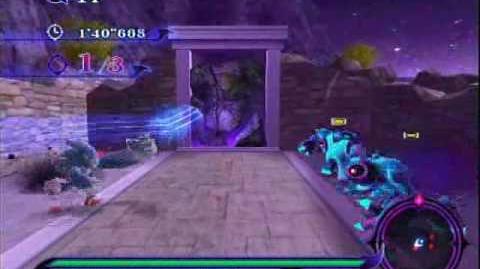