The White House, from Shadow the Hedgehog.

The White House[note 1] is a location that appears in Shadow the Hedgehog. It is the official residence of the President of the United Federation. It is seemingly located in the proximity of Central City and has several pools in the back garden.

The White House is based on and resembles the real-life building in Washington, D.C. The White House also has a large office room for the president, similar to Oval Office.

At the beginning of Shadow the Hedgehog, the president is contacted by his Secretary, who reports on alien invaders getting pushing back from the Westopolis and reporting alien invasions in five other cities in the country. The president tells her to command the generals never to surrender to terrorists.

Depending on, if the player chooses to follow a True Dark path in the game, Shadow and Black Arms manage to take over the Space Colony ARK and take over Earth, beginning by defeating all leaders who resist their invasion. During this, Black Arms activate the Eclipse Cannon and fire directly to the White House, destroying Central City along with it. However the President has got time to escape from the White House before this to the GUN Fortress, where Commander tells him that the citizens of Central City have evacuated the day before to the safe zone.

If the player chooses to follow a Semi-Dark path, the White House does not get destroyed, but the President will get evacuated from the building by GUN Commander and GUN Soldiers to the Air Fleet due to Central City being lost to the Black Arms. Outside on the garden of White House, Black Doom despises their escape and commands Shadow to follow them to the Air Fleet and destroy the President's escape pod. 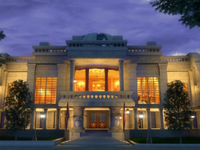