White Cave (ホワイトケイブ, Howaitokeibu?) is the fourth track of the Babylon Story in Sonic Riders. It follows Ice Factory and precedes Dark Desert. It is only playable with Jet the Hawk in story mode.

In the jungle, Jet and Wave are waiting for Storm to get back from Ice Factory. Wave is nervously pacing around for him to come back, while Jet is lying down to take a nap. Jet tells her to relax, and then she gets worked up. She starts babbling about responsibility while Jet doesn't listen to a word she says. Instead, he sees Sonic performing a trick and sneaks away to mess with him. The track in Story Mode is simply a Grand Prix race against Badniks.

The course takes place in a foggy forest, similar to that of its Hero Story counterpart, Green Cave, but much more cloudy than clear. The particles within the racetrack are spores from the various plants in the surroundings. There are still spider webs at the edges. Like its counterpart, there is a section in which the player flies over the jungle, but after going down, he is sent inside a tree root, as if it was a tunnel. There are three rails for the speed type characters in this course, just the same as in Green Cave. 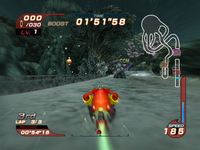