Whale Point (クジラ岬, Kujira-misaki?, lit. "Whale Cape") is the tutorial stage of Sonic Rush Adventure. It takes place on a small island northeast of Southern Island and is connected to said island by a small sandy isthmus. Blue and Iron Materials can be earned by completing this stage.

Whale Point is a small, yet charming tropical island with sandy beaches, green grass that often covers the ground and ledges like a neat blanket, palm trees, and bushes with red flowers. There is also a beautiful view of the sea and horizon which show small charming islands and a few clouds.

After Marine the Raccoon crashed her SS Marine, Tails offered to build her a new ship. To do so however, they needed Materials. Sonic thus volunteered to search for Materials at Whale Point since recent earthquakes had blocked the path on Whale Point.

The layout of Whale Point is very simple and open so Sonic's movements can be fully explored. For the majority of the stage, the player must execute the techniques/movements that Tails tell them to, to make a Checkpoint appear. Only by touching these Checkpoints can the player progress with the stage; otherwise, they will be stuck inside a confined space.

From the beginning of Whale Point, the player has to perform the following actions in succession: move left and/or right to reach the Checkpoint, run through a loop, take out an enemy with a Spin Jump, use the Jump Dash, use the Spin Dash, perform a complete Trick Action combo, use the Hop Jump, use the Humming Top, and use the Super Boost. After that, the player has to break through some boulders to reach the treasure chest. 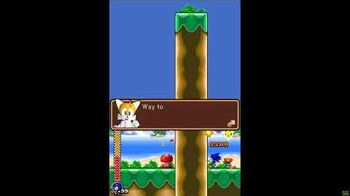