Whale Lagoon is a racetrack that appears in Sonic & Sega All-Stars Racing, representing the Sonic the Hedgehog series. It is one of three courses in the game that are based off Seaside Hill from Sonic Heroes, and the first race of the Chao Cup.

The first point of interest comes immediately after the the starting line: a fork in the path where the player can head either left or right. The direction chosen isn't relevant, though, as the two directions are practically the same. However, the intersection poses a problem, because any drivers who took the path that the player did not may be just ahead, so passing through the intersection without noting their location can set up a real traffic jam.

Should the player approach either of the two pools in the figure-eight pattern with power sneakers, he/she can launch from the orange-colored rock just to the right of the right arrow sign. Speed should carry the racecar over the lake and shave off a fraction of a second, but the trick is difficult enough to pull off, so it is probably not worth the risk.

Past the figure eight, the road follows along some planking. There are a few bits of this throughout the course, but here, there are red springs along the wall. If the player cuts too closely against that left wall, the car can be bounced toward the right. Normally this is not an issue, but here there is only token presence from rails. Therefore, it is far too easy to bounce off into the sky if the player is not paying attention, precious seconds lost to competitors in the process.

For Seaside Hill-located tracks, such as Whale Lagoon, these are the following tracks selectable for the course: 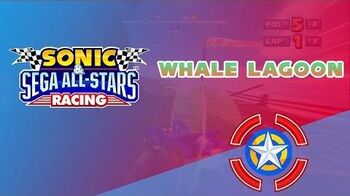