"Birth of a Salesman"

— Wes Weasely, "Birth of a Salesman"

Wes Weasely is a character that appears in the Adventures of Sonic the Hedgehog television series. He is an anthropomorphic weasel and the salesman of Handy Dandy Super Villain Appliance Distributors Limited Company, though he would often represent other companies as well.

Wes Weasely is a broad-shouldered anthropomorphic weasel about the same height as Dr. Ivo Robotnik. For attire, he wears a plaid brown and tan coat, a white undershirt, black and large glasses, a red bow tie, and light green striped boxers. He also wears a small hat, which is floating on his head. Sometimes, he is also seen smoking a cigar.

At some point, Wes Weasely decided to make deals with Dr. Ivo Robotnik, who sought to catch Sonic the Hedgehog, by offering him the latest (and most expensive) products from the H.D.S.V.A.D.L. in terms of high-tech weaponry and machines. Despite the fact that Weasley's products performed exactly as advertised, the plans involving them often failed either due to Sonic's ingenuity or Scratch and Grounder's incompetence. Dr. Robotnik quickly lost trust in Wes, and when the salesman showed him a last product, he forced him to test it along with Scratch and Grounder against Sonic at a corn farm. However, Wes betrayed the doctor and ended up helping Sonic foil Robotnik's plan.[2]

After this, Wes temporally left H.D.S.V.A.D.L., and started working for F.W.. At first, he tried to sell his new products to Dr. Robotnik, although he kicked him out of his fortress after remembering what happened last time he bought his products. However, his janitor robot Coconuts would secretly buy his magical products, and forwarded all of the payments to Robotnik without the doctor knowing.[3]

At some point, Wes was selling products to people in a small town. Though one of these people initially refused to buy the salesman's products, he would later started buying them after he was zapped by Dr. Robotnik's Stupidity Ray. Believing that he could earn money much more easily with the Stupidity Ray in his hands, Wes, along with Sergeant Doberman, fought to see who deserved the ray the most. However, they were soon left disappointed and sad when they found out that Sonic had destroyed the device. Much to their amusement however, they were told by a walkie-talkie that Robotnik remembered how he built the Stupidity Ray and was creating a much more powerful version of it, which he would store it in his new Pinball Fortress. Wanting to get the Stupidity Ray, Wes Weasely joined forces with Sonic, Tails and Doberman to sabotage the fortress. However, Wes soon realized that he was better without stupid people making things easy for him, as it would take all the fun out of his job. As such, he let Sonic destroy the device.[4]

On one occasion, Wes pretended to be limo-jacked by Scratch and Grounder and hosted a Hero of the Year ceremony for Sonic so that Dr. Robotnik could capture him, all for a Shopping Channel. Upon discovering Robotnik had swindled him by leaving him unable to air said channel, as well as their contract being written in disappearing ink, Wes sabotaged Robotnik's plan by freeing Sonic and helping him defeat the doctor, declaring he was done working for villains.[1]

Some time later, Wes Weasely found himself making deals with a polar bear until he was found and taken by Dr. Robotnik and Momma Robotnik to the former's fortress. Although he was scared by the Robotniks at first because of the last incident, he decided to help Dr. Robotnik when he learned that he was making a campaign to become president of Mobius. Wes suggested that the doctor should have a family other than Momma Robotnik, and used the Robo-Matic Machine to make the RoboWife and the RoboDog, so that Robotnik could have a better image as a family man. He would also help Robotnik on several other occasions to try and give him a better image, although all of these attempts failed when Sonic appeared on the scene. Later, when Robotnik's rival, Henry Walrus, became president of Mobius, Weasely decided to support him.[5]

Wes Weasely is energetic and charming, but also an unscrupulous salesman, who does not really care who he sells to as long as he makes money. Though he claims to stand by his products, he is quick to leave if things start going wrong. He acts like a quick-talking salesman, often speaking in double-talk and constantly over-selling his products, some of which work, others of which do not, all to his knowledge. Once, he even tried to sell an encyclopedia with blank pages.[4] He feels no remorse for helping villains or working against them; his side is the side that benefits him the most and gives him the least danger.

Though not having any special ability, Wes Weasely is a skilled salesman.

In the Sonic the Hedgehog comic series and its spin-offs published by Archie Comics, Wes Weasely is a television personality who advertises other companies and products. He appeared as the commentator during the Chaos Emerald Championship. 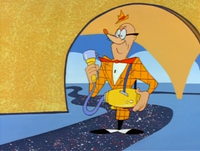 Weasely selling a Freeze Banger.
Add a photo to this gallery

Retrieved from "https://sonic.fandom.com/wiki/Wes_Weasely?oldid=2318635"
Community content is available under CC-BY-SA unless otherwise noted.