Wentos and Chao, from the Xbox 360/PlayStation 3 version of Sonic Unleashed.

In a classic tale of a boy and his puppet, Wentos travels the world with his inanimate buddy Chao. If it weren't for the obvious size difference, nobody would believe the feisty Chao wasn't the one controlling the painfully shy Wentos.

Wentos (ウェントス, Uentosu?) is a character that appears in the Xbox 360/PlayStation 3 version of Sonic Unleashed. He is a traveling human salesman who journeys across the world, selling various goods from across the globe from his shop, "Traveling Salesman Wentos".

In the game, Wentos randomly appears in Town Stages across the world, where he sells a variety of items, such as food and souvenirs that are unobtainable from normal shops.

During the events of Sonic Unleashed, Wentos had made it to Mazuri, having just run there from a unspecified location. Some time after arriving in Mazuri, Wentos asked Chao if it liked it here. Chao, however, was tired from running and told Wentos that it just wanted to sell things. Suddenly, however, Wentos found Sonic the Hedgehog talking to him, making Wentos back away and ask Chao what to do. Chao told Wentos to pull it together and sell his products to him, but Wentos was too scared to approach Sonic. Wentos following apologized to Sonic and ran away, leaving Mazuri.

After his encounter with Sonic, Wentos kept running until he arrived in Holoska. After having arrived there, Wentos talked with Chao about how they hurried to Holoska in one piece and how scary meeting Sonic was. Chao, however, rebuked Wentos for running away and asked him why he ran away. Having received Chao's message, Wentos promised he would try harder next time, only to suddenly see Sonic talking to him again. Upon hearing Sonic, Wentos shied away again, not recognizing Sonic, and asked Chao what to do. Chao reminded Wentos of Sonic in an attempt to encourage Wentos, but Wentos, despite trying to sell Sonic his products this time, was again too afraid to talk to Sonic. Wentos following apologized to Sonic and ran away, leaving Holoska.

After escaping from Holoska, Wentos ran to Spagonia. Some time having arrive there, Chao told Wentos to get over his fear as they would never sell anything like this. As Wentos questioned how he could do that, he met Sonic again. Upon meeting Sonic, Chao noted to Sonic that they seem to run into each other a lot. Taking this as a sign of fate, Chao asked Sonic to talk to Wentos and Wentos slowly, but hesitantly, began introducing himself and Chao to him. Chao complimented Wentos for his progress, who was happy that he did it as well. Chao then decided Wentos had enough for today and told Sonic that they would see him around, before Wentos left Spagonia.

After leaving Spagonia, Wentos traveled to Shamar. There, Wentos came across Sonic once more. While Chao greeted Sonic more openly, Wentos was a little more hesitant, but managed regardless. Seeing that Wentos was now more comfortable around Sonic, Chao thanked Sonic for his help, and Wentos asked Sonic what he could help him with. As Sonic asked Wentos who they were, Wentos told him that they were traveling salesmen, with Chao explaining that they traveled the world, gathering and selling rare mysterious things. Chao then explained that they would let Sonic have a look on their wares, but then revealed they did not have anything in stock at the moment. As Wentos took his leave, Chao told Sonic that they would have a new stock ready the next time they met, while Wentos told Sonic that they would see again around the world.

Although he is a salesman, Wentos is extremely shy towards strangers. He also always wears a Chao-shaped hand puppet named Chao. This puppet acts as Wentos's friend, salespartner, and adviser, making it seem like the mind of the duo. When Wentos is talking to a customer, he is normally painfully shy, but when Chao takes over, it comes across as an extremely competent merchant, while trying to help Wentos. 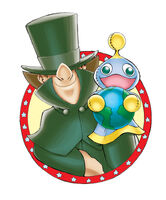