Dr. Eggman in Weapons Bed, from the 2012 remaster of Sonic Adventure 2.

A G.U.N. outpost in the ocean.

The stage is set in a similar area to Metal Harbor, only with larger platforms instead of runways, featuring many deactivated G.U.N. robots.

After meeting with Shadow on the Space Colony ARK, the dark trio head to Prison Island, where they are going to steal three Chaos Emeralds. Dr. Eggman himself must run around the Carrier fleet that belongs to G.U.N., and destroy all the robots he finds, and cause as much havoc as possible as part of a planned three-pronged assault to steal the three Chaos Emeralds.

As seen in some previous missions, bomber jets will swoop down and periodically drop bombs in Dr. Eggman's direction. There are also many Gun Hunters here, but they are dormant. Players should be careful of the Hawk Series robots, as many will attempt to ambush or strike when least expected.

1st Mission: Rush into the military base!

As usual, collecting 100 Rings would be easy if it were not for the G.U.N. robots around, who can easily cause the player to lose their Rings. The robots tend to appear when the player least expects it, and will send large amounts of weapon fire their way. Memorizing where they will appear ahead of time can greatly assist with not taking damage. Additionally, the player can repeatedly fire their weapon in order to potentially destroy enemy shots before they reach their target.

On the third aircraft carrier, the player should look in the last garage to the left and play the Mystic Melody near the Ancient Ruin inside to make a Warp Point appear. The player should jump in, which will cause them to be transported to a platform where the lost Chao is tucked between some Steel Containers.

The player should head directly to the Goal Ring without stopping to destroy the large number of enemies that are stationary on the ships. Continuously firing can help keep the player from needing to stop as they progress.

In addition to some more aggressive enemies, this mission contains a couple of minor path changes. The first involves crossing a gap where the opposite side is closed with Unbreakable Containers standing on the Steel Containers. Rolling Iron balls have also been added to the stage.

The Level Up Item in the Weapons Bed is Dr. Eggman's Large Cannon, which allows him to break Steel Containers.

At the beginning of the stage, the player should go to the end of the vessel. From there, Big can be seen on the rooftop of the south garage, sitting on his hands and knees while looking at something on the platform.

In Hard Mode, Big is sitting on one of the fuel tanks that are placed on the right, halfway across the second vessel. 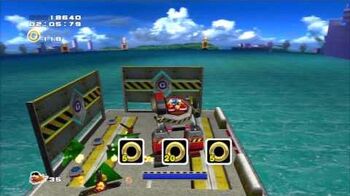 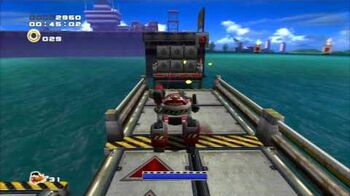 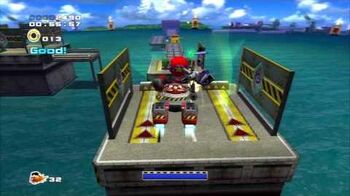 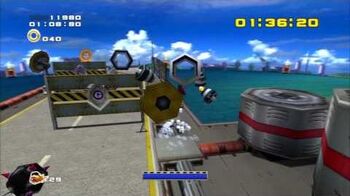 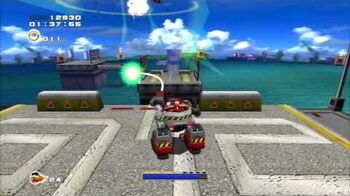