watch 02:45
The Loop (Games)
Do you like this video?
Play Sound
Main Page Gallery

Water Palace (ウォーターパレス, U~ōtāparesu?) is the sixth Stage in the Nintendo 3DS version of Sonic Generations. It represents Sonic Rush and is the first Stage of the Modern era in the game.[1]

Water Palace Act 1 is mostly water, with some parse land parts around it, making it a nod to the classic underwater levels from past Sonic games. In terms of gimmicks, this Act includes the water cannons seen in Pirates' Island, Underwater Mines, spiraling water slides, and the water pumps from the original Water Palace in Sonic Rush (although those must be activated with a Switch in this game). It also introduces a new bubble cannon gimmick that allows the player to produce bubbles that Classic Sonic can bounce on once in order to reach new paths (much like Balloons).

Towards the end of the Act, the player will enter an underwater passageway. Along this passageway, a giant Egg Diver in the background will follow Classic Sonic around while ramming the walls in order to stop Classic Sonic by bringing down debris that can damage Classic Sonic. When the giant Egg Diver finally breaks through the walls however, it will left dazed, thereby allowing the player to attack and destroy it, and open up for the passage leading to the Goal Plate.

Water Palace Act 2 plays out much like the original Zone in Sonic Rush. As such, Modern follows the same path as in the original Zone, which includes high-speed water running and water slides. 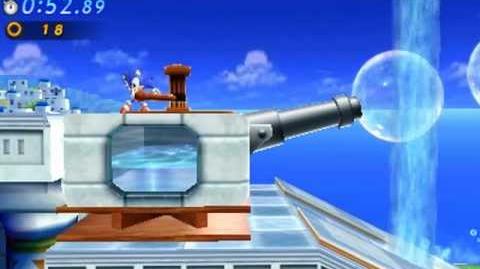 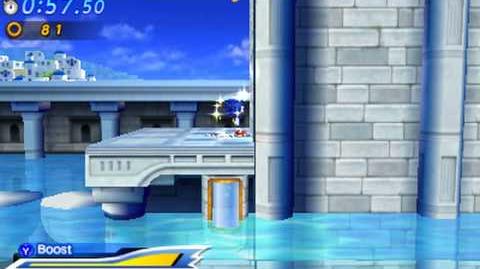