Water Palace (ウォーターパレス, Wōtā Paresu?) is a Zone in Sonic Rush. It is the second Zone for Sonic and the fourth Zone for Blaze. Like most other Zones in Sonic Rush, Water Palace consists of two normal Acts and a separate Boss Act devoted to the local boss. It takes place in a water-filled white and blue acropolis filled with ruins.

Water Palace takes place at a village decorated with white buildings and structures over a large body of water. Several water springs are located there, as well.

While out to stop Dr. Eggman's latest scheme, Sonic arrives at the watery acropolis of Water Palace. Eventually arriving at the Zone's end, Sonic comes across the Egg Turtle and whom Sonic assumes to be Eggman piloting it. As Sonic calls out to "Eggman" however, the figure starts laughing and politely tells Sonic that he is behaving cruelly by not addressing him by his full title. Sonic believes that "Eggman" is out of his mind, but the figure tells him is that he is making the same slip-up, and says that he, Eggman Nega, will destroy him. However, Sonic manages to destroy the Egg Turtle, and Eggman Nega leaves in his Egg Mobile, promising not to forget this. Sonic tells him to wait, but is ignored.

In the aftermath, Sonic and Tails are confused about Eggman Nega's identity. Sonic believes that Eggman Nega might just be Eggman in a new disguise, but Tails believes that Eggman would not change without a reason. Being rather bugged about the "ultimate power" Eggman spoke about earlier, Tails tells Sonic that they should go to his workshop to check something out. Having faith in Tails, Sonic heads there with him.

Following a strenuous encounter with Knuckles that involved an argument over whether or not she should turn to Sonic for aid, Blaze arrives in Water Palace to find her world's four missing Sol Emeralds. After making it to the end of the Zone, Blaze finds Dr. Eggman in his Egg Turtle. Defeating Eggman, Blaze sends him flying in his Egg Mobile with a fiery kick, which causes Eggman to drop the green Sol Emerald. Grabbing the Sol Emerald, Blaze watches contently as Eggman flies into the distance.

Water Palace has only two Acts per story mode, with these being identical. The player can run on water, go through inside the water-area, and through loops that lead to corkscrew-slides that push the player to run on water.

In this Zone, there are water pumps that release gallons of water can shoot the player to high distances. This is also the only Zone in Sonic Rush that has an underwater section in the Acts of a Zone. When in underwater areas, there are also Giant Waterwheels that the player can run into, which send them to the next area. If the player boosts into them, the Giant Waterwheels will spin faster and take them to a higher area.

Like most acts, act 1 and 2 are very similar, however Act 1 has more underwater routes.

Act 2 contains more aerial areas and has less underwater parts, but is a lot longer and is more platforming based than Act 1. At the end of the stage the player has to cautiously jump across platforms that drop when touched, across a bottomless pit.

The boss is the Egg Turtle, which is controlled by Dr. Eggman in Blaze's story and Eggman Nega in Sonic's story. The boss fight is like the Ghost Kraken from the game's sequel, Sonic Rush Adventure, in that they are both fought in a circle and in and out of the water. The boss chases the player around while trying to body slam them, or slam them with its head. The blue Chaos Emerald and green Sol Emerald are found here. 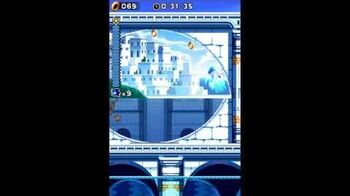 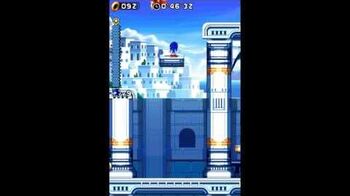 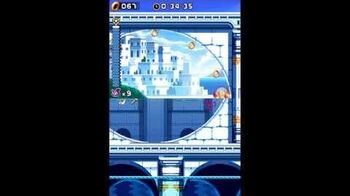 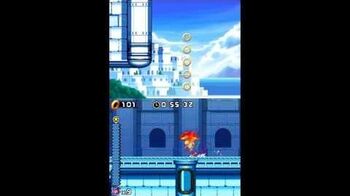