Sonic News Network
Register
Don't have an account?
Sign In
Advertisement
in: Attacks and moves, Knuckles' Chaotix, Sonic the Hedgehog (2006),
and 9 more

Sonic utilizing the Wall Jump, from the Xbox 360 version of Sonic Unleashed.

A diagonal jump off of a wall.

The Wall Jump[1] (三角飛び, Sankakutobi?, lit. "Triangle Jump") is a move that appears in the Sonic the Hedgehog series. It is a technique that focuses on the user jumping diagonally off of walls, sometimes continuously, in order to reach higher levels.

When performing the Wall Jump, the user jumps onto a wall and set off from it with their feet, causing them to be send upwards. This move is similar to the Triangle Jump, except the user moves upward when jumping off the walls instead of remaining at the same height.

In gameplay, the Wall Jump can only be used in certain areas verified for its usage. To perform a Wall Jump in gameplay, simply aim back towards a wall suitable for Wall Jumping, and continually jump off of the same wall. Upon making contact with the wall during a Wall Jump, the playable character will momentarily cling to said wall before beginning to slide off it. Also, when a character capable of using the Wall Jump jumps again while pressed against a wall, they will kick off of the wall, propelled diagonally upwards. This allows the player to climb shafts with the Wall Jump (as long as the walls are close enough).

The Wall Jump first appeared in Knuckles' Chaotix, where its action is referred to as "Kick off Walls".[2] In this game, it is one of Mighty the Armadillo's intrinsic character skills.

To perform the Wall Jump in gameplay, the player must jump against a wall and press

upon touching the wall to make Mighty grab onto said wall. Before Mighty can slide off it, press

to set off from the wall.

In Sonic the Hedgehog (2006), the Wall Jump appeared as a game mechanic automatically triggered in certain Action Stages by Sonic and Shadow. In this game, the move serves as a method for the player to travel through Action Stages by jumping between vertical surfaces in 3D sections rather than scaling parallel walls in 2D sections.

When the Wall Jump is triggered, the player is sent towards a vertical surface that the playable character then sticks to. The player must then press

to jump to the next surface. If the player does not press

in time, the character will fall into a bottomless pit.

In both the Xbox 360/PlayStation 3 version and the Wii/PlayStation 2 version of Sonic Unleashed, the move is referred to as the Wall Jump.[3][4][5][6] In this game, the Wall Jump is a move only Sonic the Hedgehog can perform in the daytime stages.

To perform the Wall Jump in the Xbox 360/PlayStation 3 version of the game, he has to possess the Wall Jump Shoes. In the Wii/PlayStation 2 version, however, Sonic starts out with all of his abilities, including the Wall Jump. Areas that can be traversed with continuous Wall Jumps are marked by the position of Rings, specifically in the game's 2.5D perspective sections.

In gameplay, the Wall Jump's mechanics are identical to those presented in the Wii/PlayStation 2 version of Sonic Unleashed. Like before, the only places the player can Wall Jump are in the 2.5D sections of the Acts. On the Wii versions, there are no surfaces specifically made for Wall Jumping, and the player is even able to Wall Jump between Unbreakable Containers. On the Nintendo DS version however, the player can only Wall Jump on walls that are marked with yellow panels (which will show a button prompt on the screen when Sonic clings to them).

To perform the Wall Jump in gameplay, the player has to jump towards a suitable wall to start clinging onto it. To kick off from the wall, the player then has to use the following controls:

Notably, when jumping during the Wall Jump in the Nintendo DS version, Sonic will be performing the Spin Jump, thereby allowing him to take out enemies in his path.

In gameplay on the console/PC version of the game, areas on the walls where Wall Jumping is possible are usually marked with Wall Jump Blocks, which only appear in the game's 2.5D sections. However, in some cases, the player can Wall Jump on walls even if they have no Wall Jump Blocks. Also, if Modern Sonic is equipped with the Direct Jump Skill, he can perform the Wall Jump faster. On the Nintendo 3DS version of Sonic Generations on the other hand, there are no special gimmicks for marking the Wall Jump areas. Also, a button prompt appears on the screen when the Wall Jump can be performed.

. In gameplay on the Nintendo 3DS version of the game, to cling onto a wall, press

while holding the Circle Pad/

in the same direction the wall is in as soon as Modern Sonic touches a wall. Press then

to kick off the wall.

In order to be able to perform the Wall Jump in gameplay, the player must be executing a Wall Climb or Wall Run. Then, they must tilt the left analog stick/

in the direction opposite to the wall's surface and press

to leap from the wall.

In Sonic Forces, the Wall Jump is a move exclusive to the Avatar. In gameplay, it can only be performed in the shafts encountered along the paths in Imperial Tower. To begin Wall Jumping, the player has to jump towards a suitable wall to start clinging onto it. To kick off from the wall, the player has to press 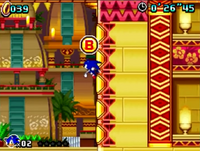