A virtual projection of peaceful hills set around a growing desert.

Virtual Reality (バーチャルリアリティ, Bācharuriariti?) is the third stage in the Sonic Forces DLC, Episode Shadow. Set in Green Hill, the stage is a modified version of Guardian Rock and thus, features similar elements.

The stage is a false reality created by Infinite with his Phantom Ruby's power. During the events of the game, Infinite trapped Shadow in Virtual Reality in an attempt to crush Shadow.

Virtual Reality is a virtual projection of an industrialized area in the once prosperous Green Hill area. In this stage there are block-based brown mountains in the background and a lightly clouded blue sky. Like the original Green Hill, the stage also features countless blocky hills in all manner of sizes and arrangements. Much of the stage is also covered in differently-striped grass that moves with the wind, and the soil itself is covered in brown checkerboard patterns. There are also totem poles with all manner of facial expressions. However, the signature flora in Green Hill is shown to have dried out in various places, and the soil has assumed a sandy hue in many locations. Also, the area has been facilitated with semi-industrial pipe platforms and Badniks all around.

In the background of this stage, one can see the desert that sprouts out in Green Hill as a result of Eggman's desertification. These dunes have replaced the water areas in Green Hill, forming lakes and waterfalls made up of sand. Also, in the horizon, one can spot Arsenal Pyramid.

Infinite's virtual reality cubes lurk within the area, and can be seen throughout the background at various points.

After Infinite uses the power of his Phantom Ruby copy, Shadow finds himself in some kind of facility in Green Hill. Rouge talks to Shadow over the radio, stating that Omega disappeared at this facility three months ago. Shadow is confused about what happened to Infinite, but makes his way through the area regardless. Shadow eventually reaches the point where Omega was defeated, but cannot find any sign of him, with Rouge calmly stating that this never really happened. At this point, Omega joins the call, stating that he has never been defeated before breaking down into constantly shouting "I am not weak".

Shadow soon successfully escapes the illusion and receives an applause from Infinite, who did not expect him to return alive. Regardless, Infinite says that with his power, not even Sonic can stand against him now. Before Shadow can ask Infinite about what he means by that however, the facility they are in begins to explode, and Infinite uses this opportunity to escape. Meanwhile, Rouge, who has finally managed to reconnect with Shadow's radio, instructs Shadow to get out of there before the facility collapses on top of him. Having no choice in the matter, Shadow withdraws.

For the entirety of this stage, Shadow will traverse a 2.5D sidescrolling area. In terms of layout, the stage is rather straightforward, consisting of one linear path with few alternate paths along it.

Along the paths in this stage are groups of Galaga Bees that fly around in long rows. By Homing Attacking these Badniks, the player can destroy an entire chain of them in seconds by attacking them one by one. By destroying these Galaga Bee chains, the player can also reach different sections in the stage. The stage also has balloons for the player to bounce on.

Unique obstacles encountered in Virtual Reality are Infinite's red virtual reality cubes, which are encountered at various points. If Shadow touches these cubes, the player will take damage. In some places, there are concentrations of such cubes that will lock onto Shadow's current position when he appears, before turning into streaks and launching themselves towards him. In other places, these cubes will float around platforms, thereby forming protective barriers with only a single opening in them that the player can utilize.

Akin to a Sonic stage, Virtual Reality has numerous Wisp Capsules filled exclusively with White Wisps along the way for the player to charge their Boost Gauge with.

Once at the top, Stomp down through the Containers on the right and follow the path from there in the rightward direction. Along this stretch of path, the player once again has to deal with enemies, avoid virtual reality cubes, and cross bottomless pits. In some places, the player must even skip across Nebulas with the Homing Attack in order to cross gaps. 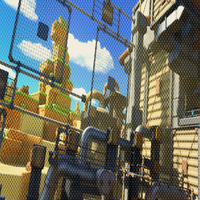