Sonic as the Violet Void, from the Nintendo DS version of Sonic Colors.

This guy's Violet Void power kind of floats you around... And pulls other stuff in towards him.

The Violet Void (バイオレット・ボイド, Baioretto boido?) is a transformation that appears in the Sonic the Hedgehog series. It is the Color Power gained by absorbing a Violet Wisp and its Hyper-go-on, which turns the user into a ghost-like void.

When using the Violet Void, the user turns into a large, ghastly and smoky black orb with violet outlines. In Sonic's case, his version of the Violet Void has his eyes and mouth on the front, though his eyes do not have pupils and are yellow, and his mouth becomes a wide sinister smile with serrated teeth that glows yellow.

. Once transformed, the player can move freely in every direction using

To use the Violet Void in gameplay, the player has to press

while in possession of a Violet Wisp. When used, the Violet Void bends space and time[1] to create a swirling purple gravitational pull that automatically draws nearby Rings and Item Boxes towards the player and slows down opponents. This Color Power is especially effective when activated near a big group of rival racers. The Violet Void can also absorb attacking Color Powers aimed at the user, making it a useful makeshift shield ability.

The main weakness of the Violet Void is that it can only be used for a few seconds and requires more Hyper-go-on from Violet Wisps to be maintained. 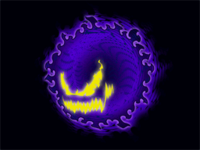 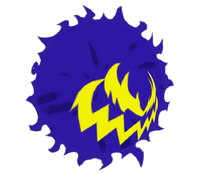