Vesuvio is a location that appears in the Sonic the Hedgehog comic series and its spin-offs published by Archie Comics. It is a secret and ancient underground city, located on an island outside the southeastern coast of Soumerca. It is a gigantic cavernous habitat underneath Mobius' largest volcano and is the residence to the dragons of Mobius.

According to myth, Vesuvio was eons ago the home to the ancestors of the present day Mobian Dragons. Legend has it that the Ancient Walkers forged the Magic Golden Rings on the banks of Vesuviou's lava lake. Under unknown circumstances, however, the dragon ancestors living in Vesuvio left the city, leaving it abandoned.

During the First Robotnik War, when the dragons of Mobius came under attack by Dr. Robotnik's forces, the few colonies of remaining dragons retreated to Vesuvio where they could live in safety. Joined by more surviving colonies, the dragons re-colonized Vesuvio and established a community there with Glint in charge. 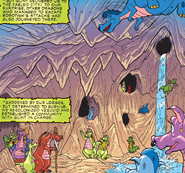 The inside of Vesuvio.
Add a photo to this gallery
Retrieved from "https://sonic.fandom.com/wiki/Vesuvio?oldid=1906978"
Community content is available under CC-BY-SA unless otherwise noted.