A putrid, multi-typed breath released in all directions.

Vector Breath (ベクターブレス, Bekutāburesu?) is a move used by Vector the Crocodile which first appeared in Sonic Heroes. When using this technique, Vector releases his powerful and putrid breath in all directions to damage his opponents with varying effects depending on Vector's level.

When performing Vector Breath, Vector falls down on his tail and balances on it slightly above the ground. Vector then puts his head down, facing forward, and does a 360-degree turn on his tail while using a powerful mouth breath that damages anything caught within its radius.

In Sonic Heroes, the Vector Breath is a Power Formation maneuver and the Wide Power Attack used by Team Chaotix. By collecting red Power Cores during gameplay, the player can increase the power, nature, and radius of the Vector Breath. The levels of power are as follows:

In SEGA Heroes, the Vector Breath returns as Vector's Star Skill in the game. In order to prepare the move, the player has to match four or more green tiles on the board to create a Star tile. Matching the Star tile will cause Vector to spit out three bubblegum bubbles at random enemies. The bubbles also fortify friendly Sword, Heart, Shield, or Clock tiles, preventing them from being matched and losing their effect. The damage caused by Vector Breath will increase based on the level.

In the anime series Sonic X, Vector uses the Vector Breath in the fight against Final Mova, breathing fire at the beast to prevent it from destroying the heroes' spaceship.[1]

In the accompanying comic series, Vector also blows Dr. Eggman away using the Vector Breath while stuck in his mutated form.[2]

In the Sonic the Hedgehog comic series published by Archie Comics, Vector can be seen using the Vector Breath in the crossover Sonic & Mega Man: Worlds Collide, spewing both bubblegum bubbles and fire to fend off minions of the Robot Master Army.[3]

In the Sonic the Hedgehog comic series and its spin-offs published by IDW Publishing, Vector first used the Vector Breath to break down the doors to Clutch the Opossum's hideout at the Central City shipping yard, blasting them apart with a high-pitched sonic scream (much to Charmy's dismay).[4] 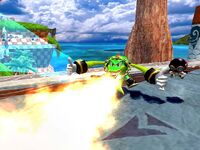