Vector: Through the Storm

Call for Vector with

to get by spots you can’t pass and get to the goal in time.

I'll send you flying to wherever you need to get to!

Vector: Through the Storm is the third Challenge Act of Crisis City Act 1 in the console/PC version of Sonic Generations. It is unlocked after clearing every Stage in the modern era and is playable only as Classic Sonic.

In this challenge, Sonic finds himself back in the tornado section of Crisis City with parts of buildings, roads and cars flying around the scene. This time, however, there are gaps too far to jump over and walls and vertical corridors too high to pass for Sonic. In this situation, the player must press

to call for Vector, then

again to throw Sonic at the current angle.

Throughout the level, there are lines of rings or enemies, hinting at where Vector should throw Sonic, often leading to shortcuts or clocks. If Vector is called directly in front of one of Iblis’ minions, both Vector and the enemy will disappear.

The player begins outside a building just before the tornado section. They must use Vector to cross large gaps and land on otherwise unreachable platforms. From there, they must continue into the tornado area, being launched from platform to platform by Vector while avoiding enemies and bumpers. Eventually, the player will come across cannons that fire them between the background and foreground, before finally reaching the Goal Plate just inside a large building on the right. 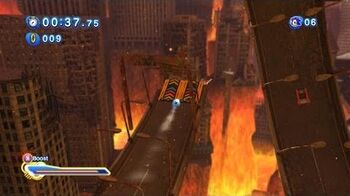