Vector: Pick Up the Beat

Vector: Pick Up the Beat

Pass notes back and forth with Vector until the croc misses the beat.

Think you can keep up with me?

Vector: Pick Up the Beat is the fifth and final Challenge Act of Rooftop Run Act 2 in the console/PC version of Sonic Generations. It is unlocked after clearing every Stage in the modern era and is playable only as Modern Sonic.

In this challenge, Sonic and Vector are standing on a rooftop that is decorated for a concert, with spotlights, loudspeakers and some small platforms surrounding them. Vector is standing on a stage in front of a keyboard. Vector will launch musical notes that Sonic must return to him by using an attack, or the Act will be failed.

Vector uses his singing voice to produce a blue, single musical note, heading in Sonic’s direction. The note must be sent back by using the Homing Attack or the Spin Jump before it touches the ground. As support, a circle of light will appear at the exact point where the note is going to land.

While waiting, Vector continues listening and swaying to his tunes. When the note comes closer to him, he blows up his Gum Balloon, causing it to burst as it collides with the note. The emerging shockwave pushes the note back and the process repeats.

After ten hits, the note turns yellow and starts moving much faster. Ten more times and the note turns red, making it even harder to catch. As Vector pushes it back the twenty-ninth time, the note does not return to Sonic but instead runs up a road left to the area. At the end of the road there is a barrier, and Sonic must boost into the note before it touches the barrier. Sonic can also send the note back before it starts flying up the road.

Either way, the note will hit Vector from behind, causing him to lose. As the crocodile angrily bangs his fist on the concert stage, the Challenge Act will be completed. 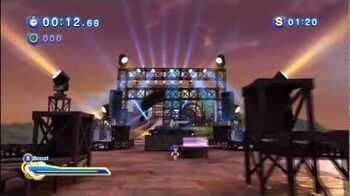 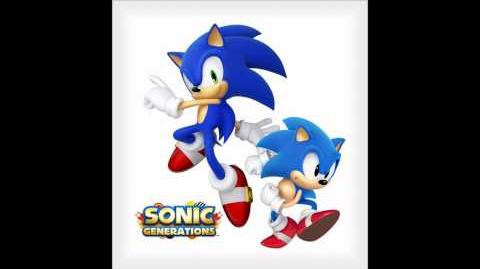