The Variable Wispon[2] is an object that appears in the Sonic the Hedgehog comic series and its spin-offs published by IDW Publishing. It is a unique, prototype Wispon that was created by Smithy the Lion.[1] It is capable of changing its powers and it is the main weapon of Whisper the Wolf.[3]

When learning of the Variable Wispon, Evan Stanley knew that it primarily served as a rifle, so she made that the Variable Wispon's core shape. Next, she built parts of the in-game Wispons into it, using their shapes to complete the "sniper rifle" silhouette. Lastly, Stanley used the motif of a Wisp Capsule to provide a visual focus and an easy place for Whisper's team of Wisps to swap out in plain view.[4]

Noticeably, the Variable Wispon does not transform so much as Whisper just holds it differently; Stanley just visualized how she would hold a hammer or umbrella, and so made sure Whisper would have places mimicing those tools' grips to put her hands.[4]

The Variable Wispon is a uniquely-designed Wispon. Instead of being designed after the anatomy of a Wisp, it is instead umbrella-shaped. The bottom of it is hooked to allow users to grip it properly. Along the light gray neck of the weapon are two rounded white, black, and light blue studs. Very noticeably near the end of the Wispon is a large rounded light blue, black, and white piece which has an open segment. The mouth piece is quite long and gray in color, with a light blue end.

The Variable Wispon is a very unique type of Wispon in more ways than one. Unlike standard Wispons, which are designed for clearing out crowds of robots, the Variable Wispon is designed for precision shots which cause less widespread damage, but more intense impacts. In addition, instead of being restricted to using just one specific breed of Wisp to power it, it can use the power of multiple Wisp breed. However, it can only house one Wisp breed at a time. When a Wisp is used they become pure energy.[5] Depending on the Wisp powering it, the Variable Wispon can assume a specific weapon mode with its own unique power:[3]

The Variable Wispon was a prototype Wispon designed by Diamond Cutter Smithy the Lion for his team, in hopes that they could share the power of each other's Wisps between them. However, before Smithy could mass-produce the Variable Wispon, the Diamond Cutters were betrayed by one of their own, Mimic, and were all killed except for Whisper the Wolf. Whisper took up a Variable Wispon thereafter, using her fallen teammates' Wisps to power it.[1] 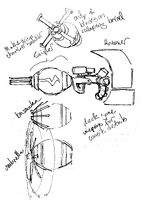 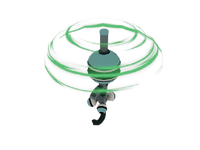