You came in 4th place in Highest editors and they are not showing you there. Also, my cousin and little brother edit on another wiki because there blocked from here, go on my user page and check them out. And, I also hope my summer improves too.--the biggest and queen of all SonAmy fans (talk) 19:56, June 30, 2013 (UTC)

Bcause (s)he would not talk about it. I told this user again and again that we could talk about it to settle this, but Kila never gave me a response, no matter what. Then it arguments escalated and then Kila began leaving personal notes on the articles, and I found it as spam. Then I tried to keep thing more in line, but she refused them, no matter how much I encourage that we should talk about. I guess, because of her refusal to communicate, things got a little out of hand, I admit that much.Ultrasonic9000 (talk) 09:05, July 10, 2013 (UTC)

Sacor, I need your Welp.

I want these images deleted, tha's all. http://sonic.wikia.com/wiki/Category:Deletion_candidates

You're back to back

Question: Why does a picture of Pudding show up whenever I send a message to a talk page even though I actually never done that? Mystic Orb: Who do you think I am? What do you want? What do I do? 10:41, July 16, 2013 (UTC)

Looks like someone is reasonably spending summer-time. Well.. I'm doing.. .. ..

Sup dude anything happening?! XD i like your pofile picure its sweet i aways liked Dr Eggman when he says shut up lamo XD

I see your delete the page that I made Sonic Ultra Top Secrets Page. In the Red box it said "Don't we already have a page for things like this?". If there is a page on this wiki with Sonic codes, Can you Send me the link of that page so I can put the Stage Select code on the page ( If it's not there ). If there's no page like that, then tell me why you want  the Sonic Ultra Top Secrets Page delete?

Sense thiers nothing I could find for Antiverse Counterpart thats when.

Play too much game! Trying to be friendly but its not nice plus would you argue with your primeminister like that

Play what everything you want you eggiman

Wow. I can't believe I'm doing this. We both have Eggman Avatars and I'm the one complaining? Shame on me.

Anyway, I'm just a tad bit concerned about your behavior on recent blogs made by YoshiWii. Your'e constantly teasing around with him and from what I'm seeing, your'e pretty much bullying him. No hurt feelings bro, I just think you should cool it down with him a bit. --Quack Like you mean it 13:44, August 7, 2013 (UTC)

Hi again who were you talking to back then

Gun'm move that gear up!

Sacor, one of the pages on my wiki was vandalized. I need you to remove what the vandal put, which is simply all the ERRORs you will see.

Here is the page .

She might be hurting the feelings of Amy fans with the page. a few Amy fans: 1,2,3,4, and 5. I had to do something about it. I don't want those fans to be hurt. Just because the page works for whoever the heck created the page doesn't mean it works for everyone. You know what I'm sayin'?

I thought that was pretty good. I don't really have any plans for comics right now, I don't have any ideas for jokes or anything, if something comes to mind I might make a comic. Myself 123 00:28, September 18, 2013 (UTC)

that you never thought I would say

Just wanted to say I really love your TF2 gameplay videos on YouTube! They're fun to watch and I've learned a lot from them. Thanks to your Huntsman gameplay video, I can finally use the Huntsman. Keep it up! ;) -- Shadowunleashed13 (talk) 19:54, September 25, 2013 (UTC)

Do you have an FC

The title kinda says it all... it's something I do for peoples birthday I put their FCs into my comics as cameos. Prime examples are here  and here.  Psyche the Hedgehog 06:26, September 26, 2013 (UTC)

Just to let you know

Nothin much. I have just watched every episode of SatAM on Netflix. It was awsome! Also, Sally's VA Kath Sourcie is in Wreck it Ralph! She voiced various characters in it. It is a coincidence to me. —Preceding unsigned comment added by IceSeason101 (talk • contribs)

It's all right, people make mistakes. Also I see why you thought it was fan art, the lines in the bottom-left corner are signatures, but that is on several other card images on the wiki as well. I may not be perfect, but thats who I am. (talk) 02:51, October 10, 2013 (UTC)

There might be a reboot of Super Mario Bros. Z.

Hey Sacor I looked on Super Mario Bros. Z wiki and it said that Alvin mentioned the possibility of a reboot on his Newsground account and that with a help of a friend he reacquired Flash. Also Alvin posted a remake of the first scene of the first episode of Super Mario Bros. Z on his new Deviantart account. It is very amazing. http://rukaisho.deviantart.com/art/Sprite-animation-practice-SMBZ-ep-1-remake-405291459

A Spot for Me on Your Minecraft Antics

dude, i wasn't yelling, i was just telling her to leave me alone, she warned me enough. BUT WAIT, it wasnt enough, you come in and warn me for the same exact reason!. this is my first day on wikia and everyone is jumping on me like wild hounds. i was warned enough. and what? is an admin gonna block me? why cant an admin tell me this him/herself, why you and her who have no rights? --KrazyKillertheHater (talk) 14:41, November 6, 2013 (UTC)

well shadowunleashed told me that toxice did so cause she cared and infact, her warnings were polite. you were the one who made me feel unwelcomed with you "oh look at me imma bigboss" tone in your message. but now that everyone is apologizing and being nice, i guess i'll let it go. thank you too. --KrazyKillertheHater (talk) 14:51, November 6, 2013 (UTC)

To Sacorguy79: Thanks for clearing up the thing about Sally no longer being robotized. I wasn't sure if she still was, but thanks for clearing it up. You also said that the guy who is part of the Sonic Team or something said that there is no more romantic relationship between the two. I am so glad about this decision. Archie Comics are kind of old, so things aren't very accurate. I a fan of Amy Rose, but I can't stand Sally. So I'm glad there will be no romantic relationship between her and Sonic. Maybe one day Amy will be Sonics girlfriend since he seems to care about her and sometimes returns her feelings for him. I don't know, but I'm just glad that Sally and Sonic wouldn't have a romantic relationship. By the way, sorry about taking up so much room writing this. Anyway thanks again.

By the way, please send me a message back to confirm. That's all for now. Thanks again. ----GymnastE13

Hey, Sacor. Nothing much going on with me ATM. I just came back here to get some of the embarassing stuff I made when I joined here 3 years ago deleted. Ugh, the pictures that I made... Anyway, how are you doing? Multiverseman (talk) 23:52, November 29, 2013 (UTC)

Heh. I wouldn't really think of myself as a "veteran", when I spent most of my first year here being an annoying troll. Still, people mature over time, and their past antics cause them shame and embarassment. Nice talking to you again, Sacor :) Multiverseman (talk) 00:04, November 30, 2013 (UTC)

Congrats on getting your admin rights back!

I found this image in Archie Sonic issue 3. The FFs' were paniking over a bomb with this thought 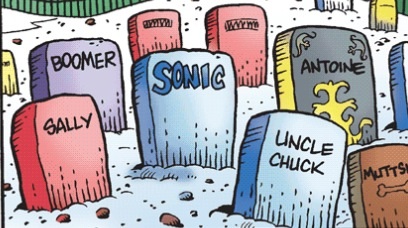 Akamia(Talk)(Want to see what I've been doing?)

Sorry for the late response, but you have my permission to use both Admiral and Leviathan if you want. -- 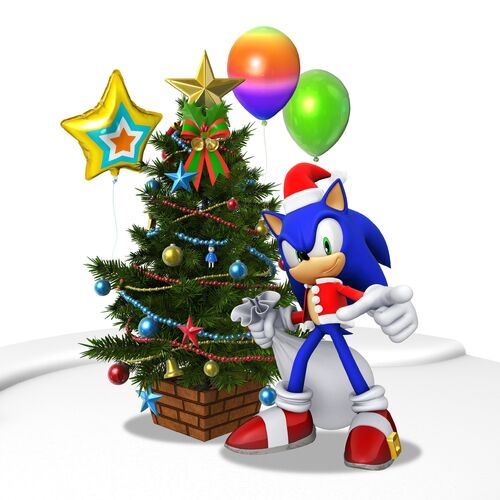 Look okay? I am sorry for getting so upset. I apologize. If you feel I was attacking you? I apologize. The truth is that I was really upset for real. It was not acting like that for attention. I really was upset for real. I am a very sensitive person and I am more prone to get offended and upset than other people. (This is also because I have Aspergers.) I really love Amy as a character. I wish you would just respect that I love her very much. I support Sonamy because I am a purist. Because I see it happening due to everything I have seen in the games. And how it was canon in the 1992 manga and Sonic X. I'll make a deal with you? Since I just apologized to you? Will you apologize to me for offending me about Amy? I said I was sorry if I was attacking you? Just please. I was really hurt by what you because it reminded me of that Amy petition? I don't want to think about that again. --YoshiWii1 (talk) 03:30, December 26, 2013 (UTC)

Can you vote for me as Editor of the month?Here's the link:http://sonic.wikia.com/wiki/User_blog:SilverPlays97/The_Emerald_Awards:_December_(Voting)JetHawk 34716:23,31 December 2013

How do I use Custom Userboxes?

I think I saw the tabs but when I looked again they were missing, so I took two screenshots 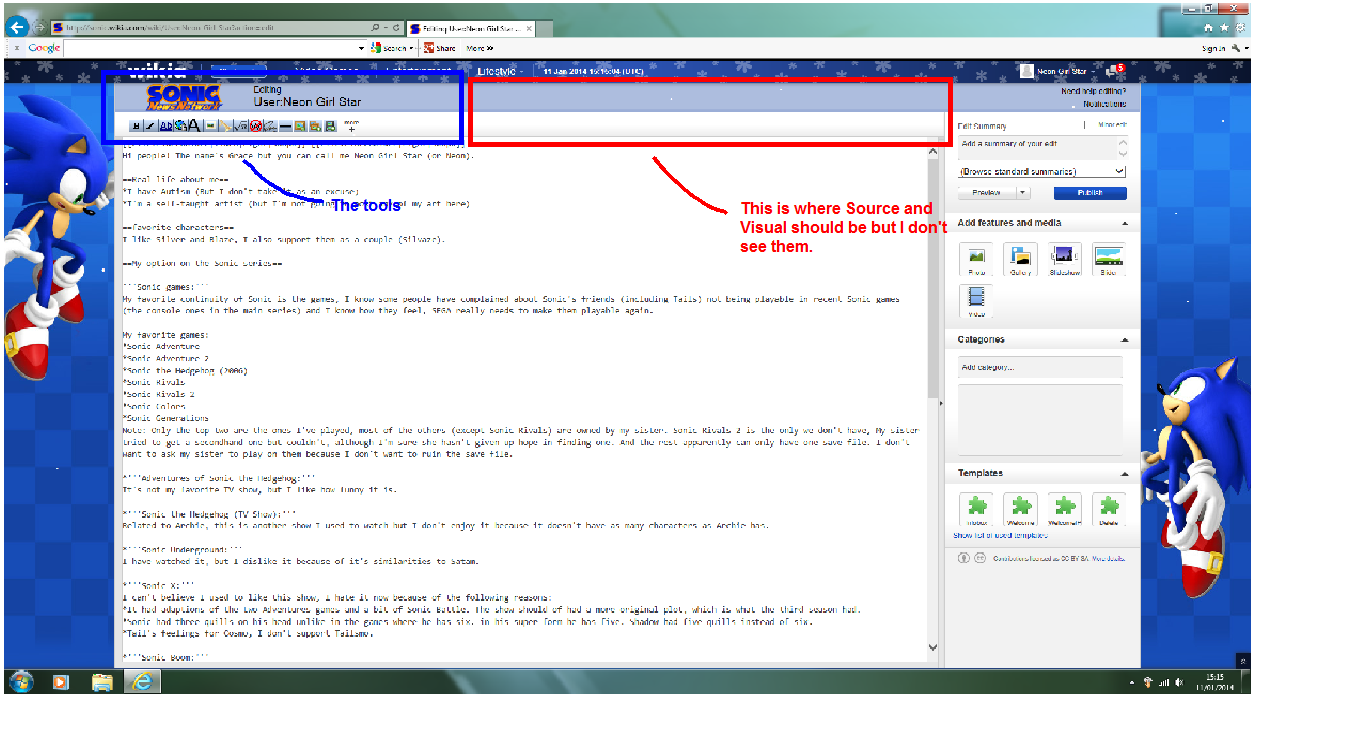 Aw man! I've seen my preferences but it looks like I didn't take notice of them and forgot where they are, the image you sent just jogged my memory. But anyway thanks for the help. (Neon Girl Star (talk) 18:27, January 11, 2014 (UTC))

Okay, this is what I've seen.

Re: Adding pictures from pages

Hi, I successfully managed to add a picture from one page to another page. I tried to use the Visual Text Editor, but like you said it might be difficult to find the picture I wanted to use. So I used the other opinion you mentioned, I went to the image's page, copied its title as well as the format, then went to my page clicked on Source mode and typed the words you mentioned. Thanks for telling how to do this. (Neon Girl Star (talk) 10:01, January 26, 2014 (UTC))

Judging has begun! Please read the bolded section at the top of the art contest blog for instructions. Thanks! Uxiea"Let's just say screw it." 23:32, February 4, 2014 (UTC)

Lolz XD Hey Sacor, it's been a while XD. I'm doing fine, I've just been busy to edit anything in here XD How about you? ♥   I am the Living Emerald, don't you DARE mess with me!  ♥

Retrieved from "https://sonic.fandom.com/wiki/User_talk:Sacorguy79?oldid=1130414"
Community content is available under CC-BY-SA unless otherwise noted.