Well, this is interesting news. So, we were told about a couple of months ago that a follow up to the hit Sonic & Mega Man: When Worlds Collide comic crossover (known as "Worlds Unite") would arrive in Spring of 2015. Nothing much was said about that other than the date and some promotional artwork.

However, what remains left of this news blog post is beyond just another promotional image. 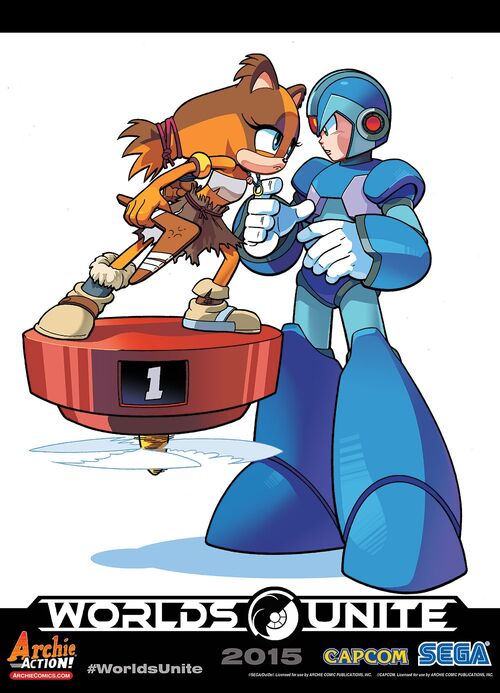 That's right, folks, it appears that the cast from both Sonic Boom and the Mega Man X will appear in the Worlds Unitecrossover. Here's what Paul Kaminski had to say:

"Not one, but TWO new casts will be joining the battle in this summer's Sonic/Mega Man WORLDS UNITE crossover event! The worlds of Sonic Boom and Mega Man X will be joining the fray, accompanying the worlds of Sonic the Hedgehog and Mega Man in the biggest crossover event in Archie Action history! The Sonic Boom comic series is part of the latest multi-media initiative from Sega, which includes video games, toys, and an all-new TV series on Cartoon Network! Mega Man X has been a staple of video game culture for decades, and we were thrilled to begin exploring that futuristic universe in 2014's Dawn of X storyline in the Mega Man comics! How will the slapstick antics of the ever-paranoid Sticks the Badger measure up against the futuristic action of X and the Maverick Hunters? Pick up Worlds Unite, starting this spring from Archie Action, to find out! And this is only the tip of the iceberg…"

So, what do you think about this news reveal? Excited? Depressed? Hyper? Comment below for your speculation and other comments! - BlueSpeeder (talk) 04:01, December 13, 2014 (UTC)

Retrieved from "https://sonic.fandom.com/wiki/User_blog:BlueSpeeder/Worlds_Unite_News:_Sticks_VS_Mega_Man_X%3F!?oldid=1266312"
Community content is available under CC-BY-SA unless otherwise noted.