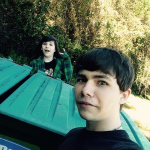 Hair color: dirty blond(but some people say it is brown)

Eye color: my eye color changes on what mood/lighting I am in it can be light/dark Blue, Green or my most seen color Gray

Favorite sonic songs: 1 his world(crush 40) 2 dreams of an absolution 3 endless possibilty 4 never turn back and 5 can you feel the sunshine ACID remix

Well I guess that I should give you a short biography. I got introduced to sonic because my cousin loved sonic (mostly shadow) so then I started watching sonic X soon I got sonic chronicles dark brotherhood then came sonic advance 2, sonic battle, sonic and the black knight, sonic unleashed, sonic mega and gems collection, sonic riders zero gravity, sonic and the secret rings. I have a DS lite, a Wii, a playstation 1, DSi, A gameboy color, And a gameboy advance Sp system. MY hobbies are:

going on the computer

thats it I guess

Shadow the hedgehog (he has so much backstory)

Knuckles the Echidna (used to be my favorite)

Shade the echidna (she is cool)

Fiona Fox(what is her use?)

Merlina (is she good or bad)

rocket metal sonic (who is he even)

For this quiz i'll use Rinku the Mutt.

2.)Do you know why you were named that?

Rinku: Single, not really seeing anyone or have any crushes.

4).Have any abilities or powers?

Rinku: I used to have omnikinesis, super speed, onmimance, and super smart but don't anymore so..... No I guess

Well I would win if I had my powers but now I would lose.

7.) Riiiight... Have any family members?

Rinku: No not that I know of. But Silver and Blaze raised me.

Rinku: I once had a blade of grass and still do.

9.) Cool, I guess. Tell me something that you don't like.

Rinku: Being alone is fine.

11) Do you have any activities/hobbies that you like to do?

12.)Have you ever hurt anyone in anyway before?

Rinku: A Mutt or Dog.

Rinku: I can just drift off into my own world alot. And when I'm in the dark when it's quite I start to get thoughts that scare me.

Rinku: Used to look up to Blaze and Silver.

Rinku: No but Blaze and Silver taught me when I was young and Sonic and his friends teach me techniques.

20.)Do you have any fangirls/fanboys?

Rinku: I guess my creator.

21.)What are you most afraid of? I promise I won't laugh.

Rinku: well if you must know I'm Clausterphobic and sometimes the dark can scare me but not often.

24.) What do you usually wear? Nothing perverted >>

Rinku:Nothing. but in sonic rivals I wore three outfits and I own a ninja suit.

Rinku: is thet even a question!?!

31.) Wow. If you could change anything about you, what would you change?

Rinku: I wouldent be so shy.

32.) If you had a million dollars, what would you do with it? And I don't want no cheap answer, ya hear?

Rinku: I would save it and do anything I could think of after I get 100 as much as I had.

Rinku: did you ask that already?

Rinku: is that a question?

Rinku: I tag anyone who wants to be tagged.

Retrieved from "https://sonic.fandom.com/wiki/User:Puppy1?oldid=328690"
Community content is available under CC-BY-SA unless otherwise noted.