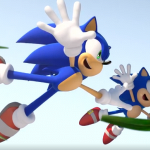 Hi, my name's Nip, and welcome to my profile page! I've been a Sonic fan since I was eight and a member of the Sonic News Network since the fall of 2013. Sonic X is my favorite cartoon ever, but I also like watching Sonic Boom and YouTube videos about the franchise, especially my own!

Outside of Sonic, I'm a fan of Angry Birds, TMNT, Peanuts, Disney-Pixar, and some more too. In terms of sports, I'm a fan of the South Carolina Gamecocks, Carolina Panthers, Atlanta Braves, and Cleveland Indians.

How I met Sonic

I first got into video games in 2007 when I got a Wii for Christmas. With it, I got a few games, one of which was Super Paper Mario. We were talking about dimensions in math class, and I thought the idea of flipping dimensions was fascinating. The next year, we went to South Carolina for the family reunion and I brought my Wii and all my games that I had. But while there (and I think it was in early July), I got two new games: NCAA Football '09 (one of my faves) and Mario & Sonic at the Olympic Games. I looked at the Sonic characters and thought, "They kinda look funny." But the two games were fun nonetheless.

A few months later, we were in a hotel room on the night before a Gamecock football game watching TV (I forgot what show we were watching.) Suddenly, a commercial popped up advertising Fox's Saturday morning kids block. One of the shows was Sonic X. I said to myself, "I'm gonna watch this show tomorrow" because the football game didn't start until 3:30. So I did. I was so impressed by what Sonic could do while watching the episode. All that time I was thinking "How is he going that fast?" and "Wow, did he just run up a wall?" and some other stuff. When it was over, I thought, "You know what? I think I'm gonna like this show." I sure did, and Sonic X became my favorite show of all time. I know it sounds crazy, but it is. I got the rest of the Olympics series in the next few years, and even a few games starring the blue streak. It's fair to say that Sonic has changed my life and there will be a place in my heart for the series forever.

Favorite quote: "You know what's the best part about being rock bottom? There's only one way to go, and that's up!" -Buster Moon, Sing

Retrieved from "https://sonic.fandom.com/wiki/User:NipsterXLI?oldid=1677481"
Community content is available under CC-BY-SA unless otherwise noted.