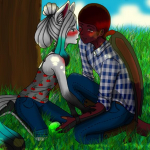 My name is Quin or Lock and I've been a fan of Sonic since Cobanermani456 played it. Some of my favorite hobbies include watching Kamen Rider Build, playing games, and writing FNaF/Mario Fanfiction and Drawing.

Bendy and The Ink Machine Characters

Bendy and the Ink Machine

Retrieved from "https://sonic.fandom.com/wiki/User:Lockhqu?oldid=2229746"
Community content is available under CC-BY-SA unless otherwise noted.