I may be going through some issues, and I may no longer be an admin, but you guys really should know that I can still do my one remaining job. I'm not in tip-top shape, but dammit I fought to keep this responsibility, so I might as well hold up my end of it.

enemies, unfair treatment because of gender, race, religious beliefs, or sexual orientation, vandals, animal abuse, spiders, rude people, growing up (I know it's a part of life, but I still don't like it!), schoolwork, having too many things to do at once, argueing with and hurting my friends, public schooling, people hurting or insulting my friends, being the center of attention (particularly with large crowds), being interrupted,

drawing, playing video games, above-average timing (games only), above-average intelligence (or so my mom says, don't buy it myself), imaginative by nature

Hey there, my username is, well, I shouldn't have to say it, since it's kinda obvious isn't it? Sonic the Hedgehog, my favorite video game series, and I have played every game I could get my hands on (usually through renting). I've even made up my own characters, which I would LOVE to send to SEGA. Could someone tell me how to do so? Please, just for the ske of it. I know I haven't really done anything here, but it would be a really nice gesture if someone would tell me.

I'm 15, born an raised in Portland, Oregon. My Date of Birth is 6/20/94. I've played Sonic for years, ever since I got the Dreamcast and Sonic Adventure. I also played Sonic Shuffle and Sega Smashpack. I later got the Nintendo Gamecube and played Sonic Heroes and Sonic Riders. I also got the DS, allowing to play Sonic Rush and Sonic Rush Adventure. The Wii later gave me access to games like Sonic and the Secret of the Rings, Mario and Sonic at the Olympic Games, Sonic Riders: Zero Gravity, Sonic Unleashed, and Sonic and the Black Knight. Anyway, my favorite character is the titular character Sonic the Hedgehog, and I don't have any real least favorite character, though I dislike the bad guys to a degree.

I appreciate imaginative writings and fanon, but only if the line betweeen fanon and reality is kept clear. As a User and Admin, I very much despise vandalism, and if I find any, I will deal with it swiftly and make sure the vandal knows that it isn't allowed. And if they continue..... They'll get to meet Mr. Banhammer.

As for my personality; My good points are that I try and be respectful to others, and I am (or at least try to be) a very loyal friend, and if any of my friends are messed with, I will be on a warpath. I attempt to be even-tempered with others and get the whole story before I take any action in a dispute. As for my bad points; Despite trying to be even-tempered, I can have the temper of a bull, and may attack a User before getting the info (though I usually calm down shortly after that). I can be a little slow, as I usually need a specific and slightly dumbed-down explanation.

I would enjoy it greatly if someone could help me keep up-to-date on some subjects, since, while I'm a big fan of Sonic, I've never been good at getting info, especially since I can't find an english Sonic website. So, If someone could tell me about stuff (which no one has an obligation to do) that would be great, especially on artist/character contests, since that's about the only way I'll get to send my character Statyx to SEGA Japan (I'd send him to SEGA America, but I don't know if it's active or not). If someone would be kind enough to do this, then thank you.

Characters not yet created

I have recently created a forum where you can talk about whatever you want, or Roleplay to your heart's content. If you want to check it out, go here

I'm currently working on a Sonic fighting game that will have both canon and fanon characters. If you want to check it out, go here!

Don't worry, no one has to pay attention to this, I'm just giving ideas. So, here they are.

1. The characters must have met face-to-face in current canon.

2. Both characters must be alive.

3b. Characters who have made one-issue appearences in comics, or will not make any further appearences, they may not be paired with characters other than ones that meet the same criteria.

4. At least one member of the pairing must have shown conclusive evidence of romantic intrest in the other character. (NOTE: This rule is manditory. If the pairing does not meet this rule, regardless of how many others it meets, the pairing is null and void)

5. Conclusive evidence must be given, and evidence that can be interpreted as evidence, but not conclusively, must be stated as such.

6. Pairings must avoid any controversial topics, but only if possible.

7. Should a pairing meet at least 4 of the 6 above rules, a yet to be defined number of admins/bearecrats must be shown, and approve of, the pairing before it can be put up.

Like I said, no-one has to pay attention to these ideas, but if you like them, tell me. However, I just want to make it clear that if someone uses these guidelines in a pairing article, without the approval of an admin, I will not take part in, or approve, of said article. That is all.

An example of these guidelines and my format of pairing articles would be the (albeit incomplete) article SonAmy.

Would you like to speak your mind about my pairing guidelines? Or would you prefer to ask the Green Bolt any question you want? Or, would you like to contemplate the future of the SNN? Either way, go here. Enjoy!

Pictures Given to Me 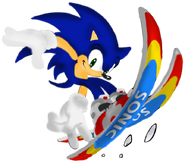 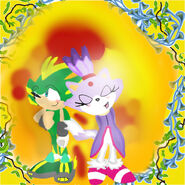 From Tawny; Don't they look cute together?
Add a photo to this gallery

For Twister
Add a photo to this gallery

Retrieved from "https://sonic.fandom.com/wiki/User:Kagimizu?oldid=2063233"
Community content is available under CC-BY-SA unless otherwise noted.