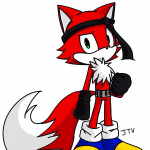 Hello everyone!I do quite enjoy the Sonic games.I played Sonic Heroes when I was 6 years old or something I can't really remember it's been a long time anyway I didn't beat it,but I did beat the Team Chaotix levels.But I did get Sonic Unleashed,but didn't that either because of Eggmanland I mean I am good but not that good.I also recently got Sonic Generations,which I did beat now we are getting somewhere!I read some of the Sonic Archie comics like the saga with the Egg Beater,the two issues with Sonic getting captured by Team Hooligan and the Destructix,the Genesis Saga,the one where Sally gets roboticized and the one after that,and the one with the introduction to the Secret Freedom Fighters.I really did quite enjoy them.I also read the Mega Man Archie Comics Issue 1-12.Now stay beatiful ciao!Recently I have read more of the Archie comics and I still love them!And now I have perfected my User page enjoy and please comment!

My fan character Jack the Cat

Able to sneak up quietly on anything and anyone

Jack was living a peaceful life in Furville with his family. Then everything changed when the Eggman Empire attacked.The town was badly damaged and most of the people have been kidnapped to be put into Badniks. Jack moved to Station Square and joined GUN to combat the threat of the Eggman Empire. Unfortunately because G.U.N. can only attack Eggman when he makes an attack on one of the countries protected by G.U.N. Jack left the organization and became a lone spy.He then one day starts his own Freedom Fighter team at Empire City where the mob like Egg Boss Rotten the Rat has taken residence.

Jack may look sweet and cuddly. But once you make him angry he is one mean cat.Usually he is mellow. And he is a bit of joker and a bit lazy at times.But when he's not lazy and full of energy he is happy and upbeat But when he is on a mission he goes into serious mode.Jack can be talkative at times.To the point where he interrupts other people.Jack the Cat can also be pretty truthful. But sometimes he can be a bit too truthful. Although he can be able to keep some secrets. Even some secrets told to him by his friends...well most of the time he can anyway.Jack can actually be cuddly sometimes. And he likes to give hugs a lot. Especially to his friends.Despite his silliness he actually can be pretty smart. He may not have a high like Eggman or Tails but he still manage to figure out a solution to a problem the Empire City Freedom Fighters are facing.

My cousin's FC James the Wolf

Stronger then an average wolf and knows many fighting techniques.

James the Wolf always admired the Wolf Pack. He tried to join them multiple times but kept getting turned down for being too young. He kept working hard and kept training until he could be able to join but still couldn't make the cut. One day he was in Empire City and helped the Empire City Freedom Fighters with defeating an Interceptor.Ever since then he made new friends and joined a new team.

James is a no nonsense kind of guy. He hates it when people make jokes about something serious or when someone breaks the law. He also likes to help people who need help. James is a hard worker always getting ready for his goal and gets very busy while doing it.When James is not battling the Empire City Egg Army he is normally playing sports,exercising,or playing video games.Unlike Jack who is scared by a lot of things James is pretty brave.

Retrieved from "https://sonic.fandom.com/wiki/User:JokerJay779?oldid=2098884"
Community content is available under CC-BY-SA unless otherwise noted.