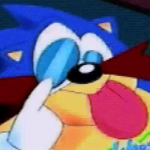 Longtime Sonic fan. I like to dig in the internet to find some interesting Sonic stuff old and new, like the old Sega website archive and Sonic/Smash Bros updates. A big example I did is this blog about Archie. I am also on Twitter under the same name seen here. Extra account: User:TheBrain101

ORIGINS OF A NEVER ENDING ICESEASON

From here, you can see how much of a big baby in 2011 (but not as bad as SammyClassicSonicFan is) Under construction for now.

And now, an old quote: When you do that, play the acid version of Can you feel the sunshine!" Source:How to make a Tails Doll

Another one: I know that, if Sally is dead, Amy could take the body, and burn it some where and tell Sonic that Sally broke up with.. WAIT! SHE IS STILL ALIVE! SONIC UNIVERSE TAKES PLACE YEARS AFTER THE COMICS SO SHE IS STILL PROBALY ALIVE!

Wow, I barley knew any Archie stuff back then.

Sonic Games I have

Retrieved from "https://sonic.fandom.com/wiki/User:IceSeason101?oldid=1400116"
Community content is available under CC-BY-SA unless otherwise noted.