NOTICE: Information on this page is outdated. Alter the Wolf and "Protector of Chaos" have moved to deviantart.com. If you wish to stay updated with my progress on the series, as well as my other works and projects, please see my account on deviantART.

Alter the Wolf (ウルフを変更, Urufu o henkō?) is the main character in "Protector of Chaos". In this story, he is soon chosen to be a Protector of Chaos and that he must defend his given Chaos Emerald from the dark forces.

"Protector of Chaos" has been remastered! See deviantART.

Protector of Chaos is a narrative concept depicting the events of Alter's adventure in this story. By reading this story, you will be able to understand who Alter is and why he is after the 7 Chaos Emeralds.

Team Emerald is a narrative concept depicting the events of Team Emerald's adventures. By reading this story, you will be able to understand who Team Emerald are, and what their motives are.

Alter takes the phrase "the lone wolf" to its fullest extent. Alter loves to be alone, especially on a starry night and hates it when clouds block his view. Because Alter tends to isolate himself from others, he can be a little shy when talking and being around others, though he may not make this obvious to see. Instead of talking, Alter prefers to listen very closely and will only say something when he is asked a question or if he is absolutely certain that his words are accurate and hits the topic.

Despite his "lone wolf" nature, Alter can be quite demanding when he is angered or feels that it is necessary to be demanding. Alter will do almost anything to reach his goals, for he shows no mercy in combat even on the weakest opponent.

Alter's main ability is cryokinesis. Cryokinesis allows Alter to control and even create ice out of thin air. Alter can also use cryokinesis for transportation such as creating platforms of ice to be used as a bridge or even to fly on.

Alter is capable of using a few Chaos abilities such as Chaos Control. Alter can use numerous amounts of abilities when he combines Chaos Control and his cryokinesis. When he collects all seven Chaos Emeralds, he can achieve his super transformation, Super Alter.

Alter later finds out in POC that he was given a second ability called umbrakinesis. This enables Alter to control shadows and darkness. Alter obtained this second ability from Mephiles the Dark when he first used Chaos Control to escape Tikal's sacred altar. During the process of Chaos Control, Mephiles transferred himself from the amethyst Chaos Emerald to get into Alter. The Dark Fang, a darker version of Alter, can use umbrakinesis to its fullest extent. This ability was later taken away from Alter when he finally decided to release Mephiles after Jake opened his eyes to the truth.

Cryo Shield: Alter's defensive move. A wall of ice rises up from the ground to defend Alter from an attack. It can also be used to block someone's path so that they can't leave.

Cryo Phase: By using cryokinesis, Alter can also become intangible (able to phase through solid objects). This technique is very useful for evading attacks and moving through tough terrains.

Blizzard/Dark Palm: Upon contact, the Blizzard Palm will freeze whatever body part it touches. The Dark Palm has the same effect, but it is infused with dark energy, making it difficult to thaw, and the ice spreads to cover more, so long as it stays on.

Ice Fang: Using one or both hands, Alter fires a torrent/stream of ice at the enemy. Or fire Ice dragons at an enemy which will completely freeze them on them on contact. He can make the attack more powerful by replacing the dragon heads with wolf heads, Which will cause damage in addition to freezing the enemy. He can completely control the direction they move in, and can fire anywhere from 1 to 8 ice fangs simultaneously depending on how much power he has.

Cryo Slash: In Camelot as Sir Alter, Alter's Soul Surge is Cryo Slash. Each time Alter slashes his sword, a fierce blizzard is summoned with multiple ice shards shooting from all directions.

Oh I don’t know who you will become
I don’t know where you’ll be
All I can promise is you won’t have me
Just close your eyes, that’s where I’ll always be

I search the night for some time to kill but all I can find are stars - Alter likes to stare at the stars.

The future's a place where cannot be - Alter doesn't want the Dark Fang to be a part of the future.

Close your eyes, that's where I'll always be - Mephiles is a part of Alter's conscious.

Alter the Wolf made by Katrins

Protector of Chaos... by Katrins 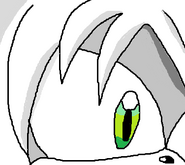 Alter the Wolf by Cesar

Alter the Wolf by MetalShadow272

Alter the Wolf's icon by Cesar

Alter the Wolf by Tangerinna
Add a photo to this gallery

The Chaos Emeralds featured in "Protector of Chaos"

Tails' Diamond Emerald
Add a photo to this gallery
Retrieved from "https://sonic.fandom.com/wiki/User:Eycestar/Alter_the_Wolf?oldid=886061"
Community content is available under CC-BY-SA unless otherwise noted.