An upcoming game in the Sonic the Hedgehog series is set to be released in 2022 in celebration of the franchise's 30th anniversary. The game will be developed by Sonic Team and published by Sega. It will be available for the PlayStation 5, PlayStation 4, Xbox Series X and Series S, Xbox One, Nintendo Switch, and PC.[1]

In an interview with Game Informer, Takashi Iizuka said that after the release of Sonic Forces, Sonic Team in Japan was trying many different approaches with the goal of creating a next-gen Sonic experience. The team had been thinking about what modern Sonic gameplay should be like. Since Sonic Team would not deny high-speed action elements of games like Sonic Generations and Sonic Forces, they opted to make a game for both current fans and new gamers to enjoy. Iizuka also stated that the game will probably define the direction to be taken for the next decade.[2] In an interview with "Sonic Stadium", Iizuka was asked if the game can be considered an anniversary title, but stated he would not call it one due to its release being planned for 2022. He makes a comparison to the way Sonic Adventure influenced subsequent 3D games, hoping that the 2022 game would have a similar effect.[3]

The symbols associated with the announcement of the game were designed to not have a meaning that can be understood by common reasoning.[4]

The game was announced during the Sonic Central video presentation on 27 May 2021 that showcased news regarding the series' 30th Anniversary celebration. Among these announcements were also the teaser trailer for this game.[5] According to Takashi Iizuka, the announcement for the game was premature, but was released nonetheless out of worry for the fans, who had not been given a proper announcement of a new mainline Sonic title since Sonic Forces.[4] 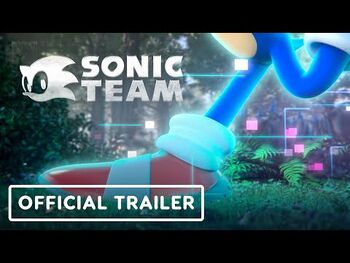