The unnamed Sonic robot appears in Sonic Adventure and Sonic Adventure DX: Director's Cut. It is one of the many robotic duplicates of Sonic the Hedgehog created by Dr. Eggman.

In Sonic Adventure and Sonic Adventure DX: Director's Cut, the robot can be spotted inside a stasis tube near Gamma's birth area in the Final Egg. It plays no important role in the story, and it is unknown what happened to this robot after the game.

In the Sonic the Hedgehog comic series and its spin-offs published by Archie Comics, this robot, referred to as Silver Sonic v2.0 or Silver Sonic II, was a Badnik in the Metal Sonic Series created by Dr. Eggman. When Eggman failed to destroy Station Square with Chaos, he sent Silver Sonic II to attack the city as revenge. However, it was defeated by the Knothole Freedom Fighters and Nate Morgan reprogrammed it to serve as the city's defender. It was later destroyed in the line of duty by Shadow the Hedgehog. 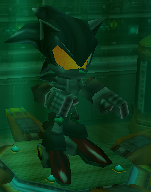 The robot in Sonic Adventure 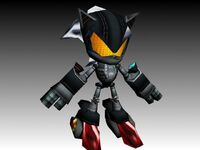