The Unified Army fighting Sigma-2, from Sonic the Hedgehog #275.

Yo! Sigma! You messed with me and Mega Man. You messed with our homes. And I bet you felt so clever, trying to do the same to a bunch of other worlds. But guess what? We're not the only heroes out there. We aren't the only ones ready to fight you. And now we're all here to kick your planet-sized butt!

The Unified Army is a group that appears in the Worlds Unite comic crossover published by Archie Comics. They are a team of heroes, ranging from Sonic's World, Mega Man's World, and several other dimensions, that were united to stop Sigma from destroying multiple worlds to attain godhood.

In the year 21XX in Mega Man's World, the Maverick Hunters, led by Mega Man X, attempted to stop Sigma at his plans, but thanks to the reploid's ability to manipulate Genesis Portals, Sigma escaped. Sigma then found himself at the Lost Hex in Sonic's World and forced Dr. Eggman to construct him a new body. With his new body, he brought Dr. Wily to the Lost Hex, forced the two scientists to built armor for the Deadly Six so he could command the zeti, and used the zeti to capture Sonic and Mega Man.[1][2][3] Sonic and Mega Man were then roboticized into Sonic Man and M'egga Man, and sent to Mega City and Mobotropolis, respectively, to plant and activate the Unity Engines to combine both worlds for Sigma to consume.[4]

While the Light Robot Masters[5] and the Wily Robot Masters, along with the help of Quake Woman and Break Man, attempted to stop Sonic Man, and the Freedom Fighters and Gemerl attempted to subdue M'egga Man, none of the heroes were successful at beating the two Roboticized Masters from activating the Unity Engines. With this, the two worlds combined,[6] and Sonic Man and M'egga Man fought each other due to their inner programming commanding the two to fight and purposely de-roboticized each other thanks to the subterfuge of Eggman and Wily. The other heroes from the two worlds, along with the three Maverick Hunters and Team Sticks–Sticks the Badger, Comedy Chimp, and Fastidious Beaver–arriving via Genesis Portal, united together to help civilians caught in the crossfire. Once the two Roboticized Masters were de-roboticized, the Freedom Fighters, Gemerl, the Maverick Hunters, Mega Man and his allies–Break Man, Roll, Rush, Dr. Light, and Auto– and Team Sticks united gathered at the Sky Patrol to rest up and devise a plan.[7]

Battle at the Lost Hex

While recuperating from the uniting worlds, the heroes rested up and Sonic, Mega Man, Sally Acorn, Rotor the Walrus, the Maverick Hunters, Flash Man, and Sticks held a group meeting on the whereabouts and motives of Sigma. During the meeting, a yellow Genesis Portal popped up, with Eggman, Wily, and Xander Payne (who escaped jail during the uniting worlds incident and rescued the two scientists from Sigma's grasp) walking in unexpectedly. While the three were imprisoned quickly, Eggman and Wily knew the location and plans of Sigma, and would tell the heroes if they were out of the brigs. Mega Man X let the scientists out and, after getting the information needed, the Unified Army made way to the Lost Hex where they would take on Sigma. Luckily, Sigma sent out the "cannon fodder": the mechaniloids and the Deadly Six to distract the heroes as he begins his next phase.[8]

Thus, the Unified Heroes on top of the Sky Patrol confronted the mechaniloids and the Deadly Six. While defeating the mechaniloids was easy enough, the Deadly Six provided enough of a challenge for the heroes. During the battle, Sticks was punched by Zomom hard enough to fall into a Genesis Portal in the sky, transporting her to the World of Street Fighter. With the Deadly Six surrounded, the heroes were then surprised by the zeti's abilities to control robots, as Mega Man and his friends, the Maverick Hunters, and Gemerl were possessed by the Deadly Six, firing at the non-robotic heroes.[9] While under pressure at defeating their robotic friends, the organic heroes struggled to defeat their friends or the Deadly Six until Eggman and Wily built and used the Egg-Wily Uppity Robot Scrambler Cannon to subdue the robots and the Deadly Six. With the armor of the zeti destroyed in the process, the unconscious zeti were imprisoned and the heroes gathered up to catch a breath. Unfortunately, Sigma emerged in his Sigma-2 form, rising from the Lost Hex and bringing in mavericks from both the past and future to destroy the heroes at their weakened states.[10]

The heroes then attempted to fight off against the mavericks, but due to their weakened conditions, were no match for the mavericks. Sigma then opened up countless Genesis Portals to different worlds to plant and activate Unity Engines so he may consume more worlds, gain their energy, and essentially become a god. The heroes were then surrounded by four mavericks–Burn Rooster, Dynamo, Vanishing Gungaroo, and Double–and were almost defeated until Sticks arrived via a Genesis Portal with heroes from the world of Street Fighter, Ryu, Ken Masters, Chun-Li, and Guile. With the arrival of heroes from a different world, this inspired Sally to have the heroes head to the different worlds and gather up other-worldly heroes to help stop Sigma's plan. With this, all of the heroes sans Cream, Cheese, Comedy Chimp, Fastidious Beaver, Flash Man, Eggman, Wily, and Xander traveled to different worlds to gather up different heroes. Eggman called Metal Sonic to deliver the final Chaos Emerald to the heroes so Sonic and Mega Man could achieve super states once more to stop Sigma.[11]

The Gathering of Heroes

Thus, Sonic and Break Man headed towards Miracle World from the World of Alex Kidd and found Alex Kidd and Stella fighting against Magna Centipede. With the maverick destroyed, Sonic convinced the two to join the fight against Sigma, to which Alex and Stella agree. At Astaroth's Castle in the World of Ghosts 'n Goblins, Sir Arthur and Astaroth with Firebrand were in a middle of a battle until Geemel and Zain interrupted to implant a Unity Engine. However, Bunnie D'Coolette and Zero arrived to stop the mavericks. Thanks to the help of Astaroth, the mavericks and Unity Engine are destroyed and the demon king orders a truce with Sir Arthur to stop Sigma, sending Firebrand to watch over Arthur. Meanwhile in Crescent Isle at the World of Skies of Arcadia, Knuckles and Quake Woman arrive to find the Blue Rogues–Vyse, Aika, Fina, Gilder, Enrique, and Drachma– destroying Tidal Makkoeen. Knuckles and Quake Woman make an alliance with the Blue Rogues, who are willing to stop Sigma.[12]

At the world of Street Fighter, Ken and Ryu destroy Magma Dragoon and the Unity Engine implemented at Metro City. Elsewhere at the same world, Blizzard Buffalo was ambushed by M. Bison at Thailand just as the former was setting up a Unity Engine, resulting in him and the criminal organization Shadaloo learning of Sigma's plans and promptly joining the others in trying to defeat Sigma. At Dream Gate in the World of NiGHTS into Dreams..., NiGHTS and Reala face off Storm Eagle and Storm Owl, respectively. With the help of Tails and Air Man, the two mavericks are destroyed and the two nightmarens tag along with stopping Sigma. Then, at Kamiki Village in the World of Ōkami, Sally and Wood Man find Amaterasu fighting against Blizzard Wolfang. The maverick is then defeated and Sally and Wood Man make an alliance with Amaterasu and her most trusted friend, Issun.[12] 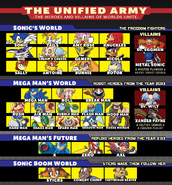 The Unified Army's members from the Sonic and Mega Man series.

The Unified Army's members from the other SEGA and Capcom worlds.
Add a photo to this gallery

Retrieved from "https://sonic.fandom.com/wiki/Unified_Army?oldid=1783276"
Community content is available under CC-BY-SA unless otherwise noted.