The Angler being pursued by Tunnel-Bots in Undersea Bolt.

A undersea tunnel and passage

Having collected the Tidal Crystal in Ocean Purification Plant, Sonic and Amy used Undersea Bolt as an escape route, but got attacked by Tunnel-Bots.

Undersea Bolt is a rocky seabed surrounding Bygone Island, cloaked in perpetual dark waters. The beginning of the level is a tall cavern, with the Ancients' underwater dock for the Angler in the back and the exits up front. Engraved in the left cavern wall is a large metal wall. Additionally, there are tower-like undersea pillars that are falling apart. All these structures carry the engravings of the Ancients. The exits out of the cave are narrow and dark tunnels with boulders and stalactites, which are only lit up by mines and a few artificial light sources.

Outside the caves, the Undersea Bot is a undersea chasm amidst a plentiful coral reef which has towering rock pillars and arches above. Like before, only a few artificial light sources illuminate this passage.

When Sonic and Amy took the Tidal Crystal from the Ocean Purification Plant, the place began to fall apart. As such, the duo used the docked Angler in the Crystal chamber to escape through Undersea Bolt. Along the way though, they were ambushed by a trio of Tunnel-Bots, who intended to take back the Crystal. However, the duo destroyed their pursuers and got back on dry land.

In Undersea Bolt, the player travels through an undersea tunnel and a deep sea passage. For this level, the player takes control the Angler with Sonic and Amy onboard. While onboard the Angler, the player can move all over the screen. The gameplay itself focuses mainly on surviving an obstacle course to reach the battle with the Tunnel-Bots. The first section is shrouded in darkness, making navigation harder, but the Angler's head lights can be used to illuminate the waters.

Environmental hazards in Undersea Bolt that cause damage upon contact include crumbling pillars (even after they hit the bottom), falling stalactites and boulders, and mines. Most of these approaching obstacles can be shot to pieces with the Angler's weapons. These weapons include the fast, but weak Harpoon Shots, and the powerful, but slow Twin Torpedoes. In addition, the player can bank left or right with the Angler to instantly avoid obstacles. Destroying obstacles awards the player with Rings.

In Undersea Bolt, the player's objective is to escape the Ocean Purification Plant. At the beginning, the Angler has to move through a cavern where nearby pillars collapse. In this cavern, the player can as well shoot nearby chests to guarantee that they will get more Rings. After passing through the collapsing cavern, the Angler will enter a tunnel filled with explosive Mines that must be shot to keep them from hitting the Angler. After getting through this passage, the Angler will then go up, leaving the player to avoid or destroy boulders falling from above. After that, another tunnel will follow where the player has to avoid and/or destroy both Mines and boulders falling from the ceiling. After that, the player will exit the tunnel and enter the sea passage.

Once all the Tunnel-Bots have been destroyed, the player will have completed Undersea Bolt and return to Bygone Island. 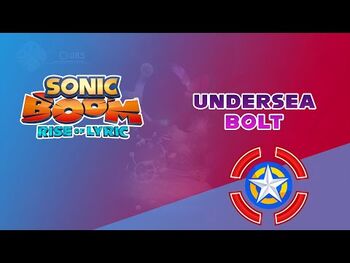