Sonic the Hedgehog 2 (8-bit)
(only appearance)

Hop on a runaway railcart for the ride of your life through showers of spikes and over daredevil jumps. Buzz-saw your way through to secret tunnels and hidden Monitors. Sometimes it's hard to get enough momentum for a good ground attack, but get a running start and keep trying!

Under Ground Zone (アンダーグラウンド[2], Andāguraundo?, lit. "Underground") is the first Zone in Sonic the Hedgehog 2 (8-bit). As with all other Zones in this game, Under Ground Zone consists of two standard Acts followed by a shorter, third Act which contains the Zone's boss at its end.

The Under Ground Zone is a rocky series of tan brick-built subterranean tunnels backed with red rocks and filled with Railcarts and magma pits. Craggy mountains can also be seen rising up in the background of the Zone.

On his quest to rescue Tails from the clutches of Dr. Robotnik, Sonic would pass through Under Ground Zone and locate the Chaos Emerald hidden in its tunnels. As Sonic speeds on though the Zone, he rolls off an ramp and almost falls into a pit of scorching lava, only to be grabbed by Robotnik's Egg Mobile just above the lava. Robotnik proceeds to drop Sonic into an area guarded by his Master Robot, Pit Master. Despite the situation though, Sonic manages to trick the doctor into destroying Pit Master, and after opening a Prison Egg, runs off towards Sky High Zone to continue his journey.

Under Ground Zone is filled with Railcarts which Sonic can ride, and damage-inducing magma pits which some Railcarts invariably dump the player into. There are also a number of breakable walls placed throughout the Zone which can be destroyed with the Spin Attack, leading to hidden items such as extra lives.

Under Ground Zone Act 1 starts out on a flat area which that branches off into two distinct paths after a small incline: one on the top, and one on the bottom. The top path follows a slowly descending Railcart track which ends abruptly at a wall. Nearby the wall is a Spring which can launch the player upwards through a section of the ceiling to find a hidden 1-Up guarded by a New Motora. Continuing along the upwards path, the player will find several breakable blocks, which, when broken, create a tunnel to the downwards path, a pit full of Rings leading to the downwards path, and another breakable wall leading to a downwards tunnel full of Rings. Should the player continue on the upwards path, they will encounter a series of Springs which lead to a 1-Up above the Bonus Panel when successfully navigated. They player can then backtrack slightly and drop down to the Bonus Panel. Along the downwards path, the player can immediately open a hidden room to their left containing a Super Ring with a Spin Attack. Continuing onward the the right leads to minecart tracks with Railcarts running along them, falling spikes from the ceiling, and pits of scorching lava which periodically spit fireballs. Eventually, the player will encounter a series of Springs directly underneath those on the top path, which, when navigated correctly, lead to the Bonus Panel.

Like the first Act, Under Ground Zone Act 2 starts the player out on a flat area which leads into a slow downwards incline. At the end of the incline are a series of breakable blocks which lead left to a lower path. Also, like in the first Act, the top path has several pits and passageways between its rails and slopes leading to the bottom path. Along the bottom path is a hidden Super Ring to the left, and a series of fireball-spewing lava pits and Railcarts. Eventually, the player will reach a large pit of spikes, which can only be destroyed by driving through them with a Railcart, granting the player safe access to the Bonus Panel.

The third Act starts on a steep Railcart track with a Railcart attached, which the player can either ride or roll down, leading to two different paths. However, both paths soon converge to the same area, which is another slope which leads directly to a pool of lava that the player cannot jump over. However, Dr. Robotnik will swoop down in his Egg Mobile and grab Sonic the moment he is about to touch the lava, leading into the boss encounter with Pit Master. After the battle, the player can continue on to the Prison Egg and destroy it, freeing the Animals trapped inside and completing the Act.

Under Ground Zone's boss is Pit Master, an antlion-like robot. Sonic has to dodge a variety of fatal bouncing black balls, while simultaneously avoiding the robotic mandibles that lie in wait at the bottom of the pit. After a set amount of time, Eggman will attempt to charge at the player, accidentally destroying Pit Master in the process.

This boss is generally considered to be a lot more difficult in the Game Gear version of the game, as the smaller screen size for that system drastically reduces the time a player has to get out of the way of the descending balls.

The blue Chaos Emerald in Under Ground Zone is located in Act 2. Here, should the player successfully navigate the Act's upper path without falling down to the lower path, they can reach the Chaos Emerald, which is hidden on a ledge above the Bonus Panel. 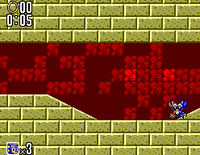