The Uber Caterkiller, from Sonic Mania.

The Uber Caterkiller[1] is a character that appears in the Sonic the Hedgehog series. It is a giant variant of the Caterkiller model that was used to intercept Sonic and his company during their trips through Mirage Saloon Zone.

Based on the common caterpillar, the Uber Caterkillers are basically giant versions of the Caterkillers with design elements borrowed from the Bead Worm Boss added to it. Surmised, these robots are made up of a string of ten giant pink spheres, with the one up front acting as the head. The head sphere has a mouth with sharp teeth, golden antennas on the side, cartoonish eyes with rectangular black pupils, and a glass dome covering the brain circuitry underneath the scalp. The rest of their spheres have yellow underbellies and gray spikes covering them.

In Sonic Mania Plus, an Uber Caterkiller attacked Sonic, Tails, Knuckles, Mighty and Ray when they made their way through Mirage Saloon Zone. Although the Uber Caterkiller tried, it was ultimately defeated by the group of heroes.

The Uber Caterkillers are super-fast burrowers despite their size, capable of moving through sand like it is water and reaching extreme heights when leaping out of it. Their backs are also covered in spikes while their underbellies are too tough to get damaged by blunt attacks, making it nearly impossible to hurt them.

The Uber Caterkillers' only vulnerable spot are their heads, which are both unprotected and hide their most vital circuitry.

A battle against a giant Caterkiller that swims through sand. When this boss jumps out of the sand, the player must hit its head. After six hits, this boss will be defeated.

The Uber Caterkiller is one of the two mini-bosses of Mirage Saloon Zone and the fifteenth overall boss of Sonic Mania and Sonic Mania Plus.

This boss battle is initiated when the Heavy Magician appears and makes a Rattlekiller appear out of her hat, which then turns into the Uber Caterkiller.

The entire battle is fought aboard the Tornado. The Uber Caterkiller's attack patterns consist of it burrowing through the sand in the background for a while before leaping out of the sand to attack the Tornado, much like the Sandworm in Sonic & Knuckles. These leaps can come from either the back, the front or the sides of the screen, but are easy to dodge. Also, the player can easily track the Uber Caterkiller by keeping an eye out for digging activity in the sand.

To damage the Uber Caterkiller, the player must attack its head when it is directly above the Tornado; hitting its underbelly will do no harm, and hitting its back will only damage the playable characters. This can also be tricky when it jumps from the front or back of the screen as the head is only level with the player for a short amount of time.

After landing a total of six hits, this boss will be destroyed. The player can then touch the Goal Plate that falls from the sky and finish the Act. 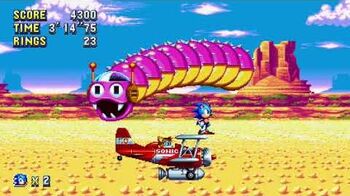 A battle against a giant Caterkiller that throws its body segments at Knuckles. When the head of this boss gets close to the ground, the player must hit it. After six hits, this boss will be defeated.

The Uber Caterkiller is one of the two mini-bosses of Mirage Saloon Zone and the fifteenth overall boss of Sonic Mania and Sonic Mania Plus.

After landing six hits, the Uber Caterkiller will explode. The player can then proceed to the Goal Plate and finish the Act. 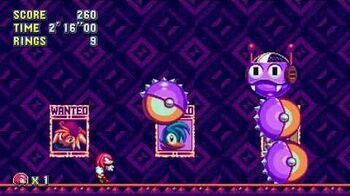