UFO SegaSonic (ＵＦＯセガソニック, Yūfō segasonikku?) is a UFO Catcher released by Sega on 31 December in 1991. It features Sonic the Hedgehog-themed graphics and plays a selection of music tracks from the original Sonic the Hedgehog on the Sega Mega Drive. The game was exclusively released in Japan and most of the prizes were provided by Sega through their Sega Prize company.

UFO SegaSonic features a claw in the middle. After inserting a coin, the player takes control of the claw and can move the toy by controlling it. 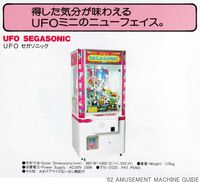 Add a photo to this gallery
Sonic the Hedgehog spin-off games
Retrieved from "https://sonic.fandom.com/wiki/UFO_SegaSonic?oldid=2279615"
Community content is available under CC-BY-SA unless otherwise noted.